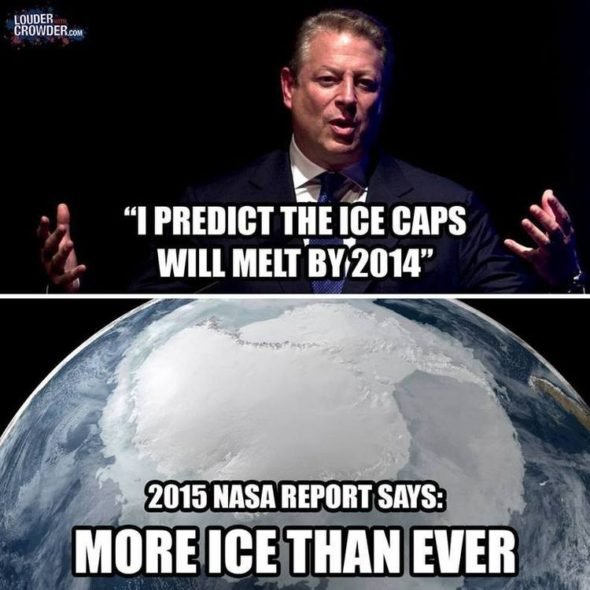 In order to Make America Great Again, one hopes and prays that President Trump completely and immediately dumps the Paris Environmental scam that Obama set up for us as part of his anti-American “Fundamental Transformation of America“.

Anyone who is informed about the warming/change issue knows that the warming/change “science” is based not on science but on the programming of the models that liberals have established to convince the uninformed that humans are destroying the environment. The United Nations, North Koreans, Red Chinese, or whoever gets power over America when the full impact of the United Nation’s radical environmental designs are implemented will not look favorably on America nor will they allow her to continue as the most comfortable and successful nation in the world.

For 40 years, Paul Ehrlich, Ted Danson, Al Gore, the liberal press, and the EPA have warned of the environmental disaster coming in 5 years, and then, having been wrong, retelling us of the disaster in the next 5 years, then predicting that environmental disaster will certainly occur in another 10 years. Many assume that they’ve been lied to. And it’s now time to reverse the schemes of Obama and his radical pals and trash the environmental lies that will certainly halt all progress for our nation and for our children‘s futures.

Politicians can talk all they want about repealing Obamacare, lowering taxes and limiting the power of the EPA as ways of reversing the fortunes of America, but the rubber meets the road with the United Nations and the dictatorial power that gang of rogues will have over this great nation if we go forward with the Paris Environmental plans.

Get out now before it’s too late.

Support Conservative Daily News with a small donation via Paypal or credit card that will go towards supporting the news and commentary you've come to appreciate.
Tags
Paris Accord