The forces arrayed against President Trump are legion, and they seem to be gaining ground by the day. Some of their success is clearly due to faux pas of the newly minted president, but most of it is propagandistic and ostensibly viable due to the sheer volume of vitriolic assaults. Consequently, some is well deserved, but most is not. But one can’t help wonder if he will make it through even one full term under the constant barrage of negativity heaped upon him day after day. 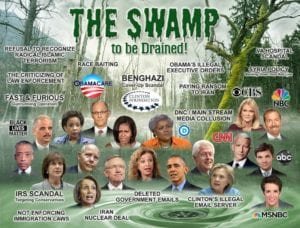 The forces aligned against the president include the predictable antagonists, and some entirely unique to this president. The very fact that he ran as a Republican apparently requires Democrats to oppose him in everything he does, even when they agree with his actions. A case in point is the firing of FBI Director James Comey. The Democrats have been calling for his dismissal after his announced investigation of Hillary Clinton’s email improprieties two weeks prior to the election. They felt he at least in part, cost Clinton the election. But when Trump actually fired him last week, congressional Democrats were all opposed to the firing, and criticizing him for how he did it, surmising and theorizing over the motivation behind it, and the timing,

As ardently as they oppose everything he does, if he were to announce he was all of a sudden pro-abortion, they’d likely turn pro-life. If he were to propose a new entitlement, they’d oppose it. Whatever he does, even if it benefits the country, they’ll fight him tooth and nail all the way. And they thought the Republican controlled congress was obstructionist to Obama! No one does it better than congressional Democrats.

Even former President Barack Obama is not content to simply fade away. According to the National Review, Obama “is now reportedly ready to join the efforts of a well-funded political action committee to undermine the Trump presidency.” 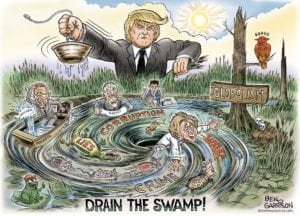 Clearly, the mainstream media can say no good about the man as well. Media researchers Nich Noyes and Mike Ciandella of Newsbusters.org, pored over evening news coverage from January 20 through April, and quantified the negativity. Of over 1,000 stories about Mr. Trump and his administration, over 1,900 minutes were negative. Only 186 minutes were positive “in content or tone.” That amounts to 89% negative reporting. This is unprecedented at this stage in any modern era presidency.

This is even more negative than Trump’s coverage was during the campaign. The Harvard Kennedy School’s Shorestein Center on Media, Politics, and Public Policy, revealed in December that negative coverage on Trump ran at 77% during the general election campaign.

Another powerful group undermining Trump is the “deep state” – employees of the federal government who are entrenched in the ideology of the left. As the Washington Post explained in February, “’Deep state’ is a sexy new label being used in Washington to describe embedded anonymous bureaucratic bias against President Trump and Republican rule. Specifically, the deep state is leaking documents, making confidential conversations public, pushing rogue social media accounts and otherwise acting in an underhanded manner to discredit the president, his Cabinet and the policy objectives of the Republicans. The use of encrypted chat programs to communicate and the continued leaks to various media outlets are just the start. Their tactics are beginning to spread to other Democratic sympathizers and form a continuous partisan assault both from within the government and from outside groups.” 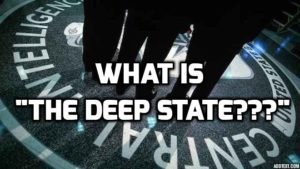 Lofgren could well be incorrect when he says the deep state “does not consist of the entire government.” The District of Columbia voted 90.9% for Hillary Clinton, and Trump managed a paltry 4.1% of the vote. At this juncture, it appears the entire governmental apparatus is undermining our democratic process. And it’s no wonder, since Trump vowed to “drain the swamp,” and D.C. is the swamp.

Journalist Glenn Greenwald expounds on the danger posed by the deep state. “It’s agencies like the CIA, the NSA and the other intelligence agencies, that are essentially designed to disseminate disinformation and deceit and propaganda, and have a long history of doing not only that, but also have a long history of the world’s worst war crimes, atrocities and death squads.” Now, imagine the havoc wreaked to our republic when those forces align with mainstream media to subvert not only the governance of a new administration, but even strive to delegitimize its very existence.

Even former Democrat presidential candidate and congressman, Dennis Kucinich, is alarmed by the clandestine elements within the deep state. As he warned last month, “…the American people have to know that there’s a game going on inside the intelligence community… at the bottom of all this is the fact that there are those that seek to separate US from Russia to reignite the cold war… wake up America!!” 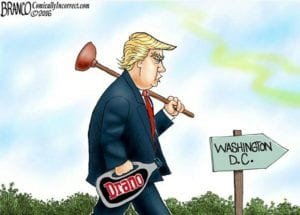 There are also factions within the Republican Party who seem intent on thwarting the president as well. The “Never-Trumpers,” and elements within the Washington establishment of the party, including some GOP lawmakers, are increasingly distancing themselves from the president.

Foreign journalists are openly calling for Trump’s assassination, congressional Democrats calling for his impeachment, and the whole world seems aligned against the man who just six months ago won an Electoral College landslide.

All of these forces are attempting a regime change in the United States via a coup d’é·tat. The very essence of our democratic republic is at stake. It’s one thing to oppose the policies, initiatives, and even the evidences of ineptitude which occasion the administration, but it’s an entirely different matter to actively seek to decapitate our government for political ends. That’s treason, and sedition, and certainly conduct unbecoming anyone who claims to be an “American.”