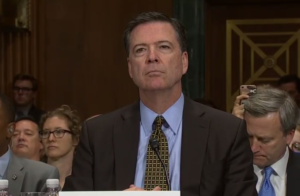 “Today, President Donald J. Trump informed FBI Director James Comey that he has been terminated and removed from office,” Spicer said in the statement. “President Trump acted based on the clear recommendations of both Deputy Attorney General Rod Rosenstein and Attorney General Jeff Sessions.”

Comey is only the second FBI director to be fired by a president since 1972. And the director reportedly found out about his firing from TV News.

No single reason was given in the statement, but Secretary Spicer said that the search for Comey’s replacement would “begin immediately.”

Comey lost the confidence of almost everyone in Washington, Republican and Democrat alike. When things calm down, they will be thanking me!

The president’s afternoon was conspicuously empty and weekend updates of his activities were much lighter than normal. Now, perhaps, we know why.

Senators from both sides of the aisle added their sentiments on Comey’s departure.

The chairman of the Senate Judiciary Committee issued a statement in which he said that trust in Comey “has clearly been lost.”

“The handling of the Clinton email investigation is a clear example of how Comey’s decisions have called into question the trust and political independence of the FBI,” Sen. Chuck Grassley said in the statement. “The effectiveness of the FBI depends upon the public trust and confidence. Unfortunately, this has clearly been lost.”

“President Trump called me at 5:30 p.m. and indicated he would be removing Director Comey, saying the FBI needed a change,” Feinstein said in a statement. “The next FBI director must be strong and independent and will receive a fair hearing in the Judiciary Committee.”

Not to be left out, Hillary Clinton campaign aides quickly attributed the firing to, you guessed it, Russia.

Brian Fallon, Clinton’s press secretary during the 2016 campaign, said, “This is clearly a president who is feeling the heat of the FBI’s ongoing Russia investigation.”

Fox News’ contributor Charles Krauthammer asked why the firing was done with such malice.

.@krauthammer "Why was is done with malice? There would have been so many ways of having Comey…step aside." More: https://t.co/QjfAhudrVQ pic.twitter.com/kRlfR2SgNd

The termination letter, hand delivered by Oval Office Operations Officer Keith Schiller, to Comey from President Trump does not give a specific reason for the director’s termination. Instead, the president says that he agrees with DOJ leadership that Comey is “not able to effectively lead the Bureau.” 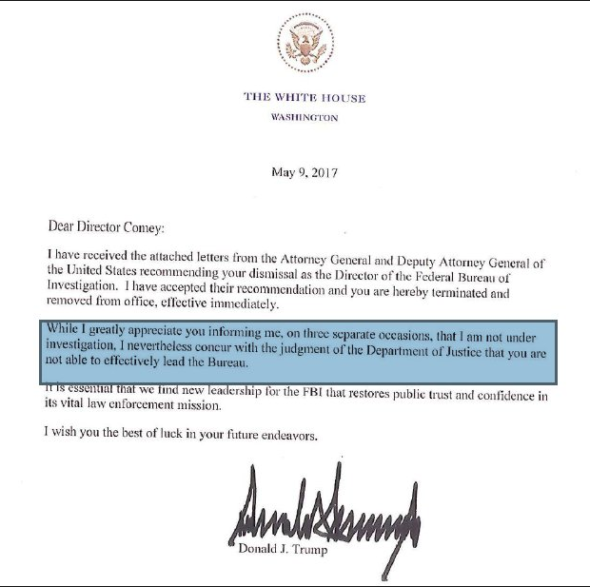 *this is a developing story and will be updated*

Support Conservative Daily News with a small donation via Paypal or credit card that will go towards supporting the news and commentary you've come to appreciate.
Tags
James Comey the FBI