The American Health Care Act of 2017 has passed the House of Representatives by a vote of 217 to 213.

In what may be a historic vote, the yeas and nays split along party lines but the Republican health care plan, including one amendment, now moves on to the Senate.

The first vote came on H.R. 2192 which amends AHCA to remove the exemption congressional members and their staff would have enjoyed. The amendment passed 429 – 0.

This bill has been proposed to be passed in tandem with the American Health Care Act (AHCA), the bill that would replace the Affordable Care Act (aka Obamacare). In order to meet the requirements of the budget reconciliation process so that the AHCA is not subject to the Senate filibuster, the AHCA exempt Members of Congress from some changes to the health care law. This bill, H.R. 2192, removes those exemptions so that Members of Congress face the same health care options as other Americans. 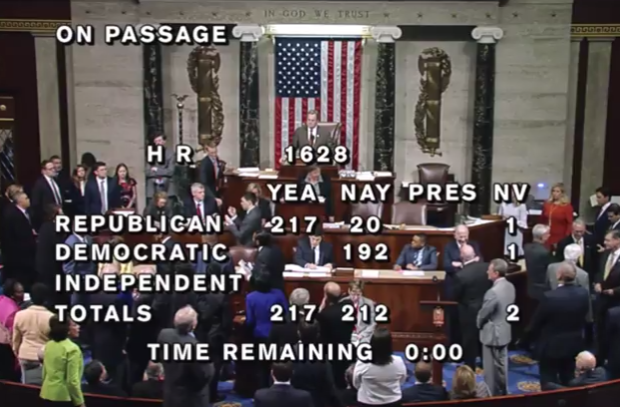 The second vote considered H.R. 1628 which is the American Health Care Act of 2017. The bill passed 217 – 213. Not a single democrat crossed party lines to vote for the bill while 20 Republicans voted against. Once the vote total hit 216, the floor of the House erupted with the singing of Steam’s “Na Na Hey Hey Kiss Him Goodbye.” “Na na na na, na na na na, hey hey hey, goodbye,” echoed for a full minute once victory for Republicans was certain.

Support Conservative Daily News with a small donation via Paypal or credit card that will go towards supporting the news and commentary you've come to appreciate.
Tags
Health Care Reform Obamacare repeal The AHCA The American Health Care Act the U.S. House of Representatives