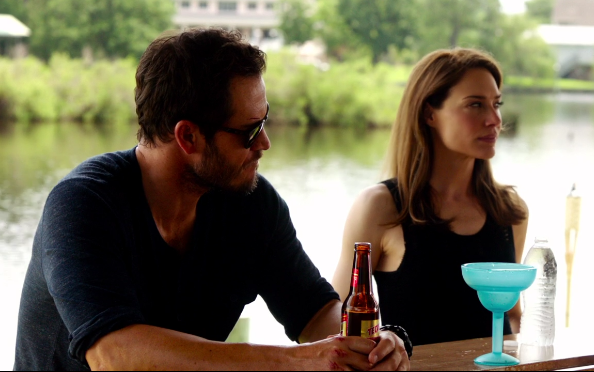 Whether you’re a cord-cutter or just use streaming services to find movies you somehow missed, Hanna takes on the onerous task of watching movies that may be good on the free screen but perhaps only because they’re free.

Precious Cargo is a 2016 straight-to-small-screen widget from the Oasis films factory of mediocre movies. Granted, Oasis did manage Lone Survivor and … um .. well, everything else is pretty much a b-movie action film streamer’s dream – free, fast-action, bad dialogue and full of b-list hot guys, hot women and lots of fast cars and exploding stuff.

The movie is kind of a budget version of the Ocean’s series. Gang of criminals trying to rip off a crime boss/casino magnate. It’s the same idea with more gunplay and less wit.

Bruce Willis got top billing despite making little more than cameo appearances as Eddie the crime boss who just shows up to threaten people by phone or in person. His appearances are odd if you’re trying to take the movie seriously but they add – albeit little – depth to the plotline.

Lead man Jack (Mark-Paul Gosselaar) is a criminal that specializes in stealing from international weapons dealers and thieves with the backing of his marksman companion Logan played by Jenna B. Kelly (Extraction.)

The film starts out presenting an oddly constructed love triangle between Jack, the girl-next-door Jenna (Lydia Hull) and his maniacal ex-girlfriend Karen (Claire Forlani) who spends the entirety of the movie getting Jack into dangerous heists that she is unable to complete on her own.

The center plot is Jack pulling in cohorts and compatriots to magically complete dangerous heists that Karen is unable to complete on her own.

Karen’s failed jobs and ambitions put Jack and Logan in the sights of Eddie (Bruce Willis) who, while barely in the movie, is a ruthless opponent who knows Karen all too well.

Full of car/boat chases, a virtual cornucopia of gunfire, and a  generous topping of stuff blowing up, this Oasis offering matches up with its predecessors: Extraction, Arsenal, and a plethora of similar films that have some cast members you’ll recognize from Precious Cargo.

The film is one I would have hated if I had spent ticket+popcorn and soda to see, but as an action film fan and a streaming service addict – this one gets the rating of couch worthy on Hanna’s scale of Streaming Movie Reviews.

Couch Worthy: If you’re just looking for something to watch that won’t break the bank, these movies do the trick. Grab some chips, plop on the sofa and light these up to relax and blow a few hours.