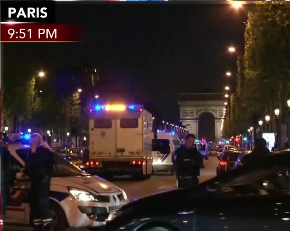 One policeman and one attacker have been killed, at least two other officers were seriously wounded and a passerby was also hit in what French officials are calling a terror attack.

The attacker was known to French security services and has been identified as Karim C. – aka ‘Abu Yousuf the Belgian’ – who had been previously convicted of shooting police officers in 2001, sentenced to 20 years, and released early.

Police have cordoned off the area and the U.S. State Department has issued a warning to Americans in Paris to avoid the area.

Reports state that a policeman was stopped at a red light in his patrol car when the attacker jumped out and started shooting into the police car, shooting and killing the officer. The attacker then ran off, pursued by officers. Two officers were wounded before the terrorist was shot and killed by police.

The attacker reportedly used a fully-automatic AK-47 rifle in the attacks.

ISIS has now claimed responsibility for the attack.

Separate reports initially claimed that two gunmen were involved and that shots were fired at a nearby mall, both of which have been refuted by Paris officials.

Support Conservative Daily News with a small donation via Paypal or credit card that will go towards supporting the news and commentary you've come to appreciate.
Tags
France ISIS Paris terrorism