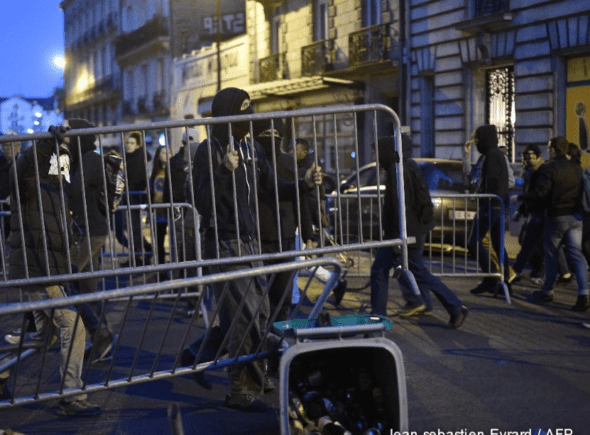 Round one of the French presidential election has finished and only the far left is taking to the streets to protest, get tear gassed and arrested similar to the ultra-left extremists in America.

Crowds of anarchists, anti-fascists and others clashed with police in Paris after early French presidential election results suggested Marine Le Pen would make it into the final round of voting.

The Independent story is correct on the surface but fails to recognize the underlying driver – socialists and anarchists cannot allow anyone they don’t agree with to ascend to power.

Sunday’s election did not actually choose France’s president, it just decided who would not be considered in the second round vote. The only ideology not represented after the results became final … the ultra-left.

One of the organisers reportedly told the crowd to protest “against Marine and against Macron” and added “whatever the results are, we will not recognise them”.

They aren’t protesting the election itself, just that every other ideology but theirs is moving on to the June election.

Le Pen has little hope of upsetting the moderate Macron in the late spring test unless there are more terrorist attacks like the nightclub attack in 2015 or the more recent killing of a policeman on the Champs Elysee.

More worrisome is the rejection of the political process which is eerily similar to the far left reaction to the election of Donald Trump in the U.S.A.

When Barack Obama won in 2008 there were no riot gear wearing police having to defend local businesses from dissenters, but Trump’s ascension to the highest office in the land has been the center of protests, marches and clashes with police.

Extremists on the left seem unable to accept that most don’t agree with their world view.