A new report by the Center for Immigration Studies assesses the Trump administration’s immigration track record after its first one hundred days. The report breaks the review of immigration action and inaction into the following areas:

The most important improvements in immigration security have been the reversal of the Obama administration’s version of “catch and release” at the border and ending the disastrous prioritization scheme that resulted in tens of thousands of deportable aliens (including many criminals and egregious immigration scofflaws) escaping removal each year. Resurrection of the successful 287(g), which allows local law enforcement agencies to supplement ICE and the Border Patrol efforts in their local areas, provides optimism that crime efforts will continue to be successful.

Worksite enforcement needs to receive more attention, but the president’s FY 2018 budget blueprint does request $15 million to begin implementation of nationwide E-Verify. Making the online system mandatory nationwide would allow employers to check the work authorization of new hires, but this action would require separate legislation from Congress. 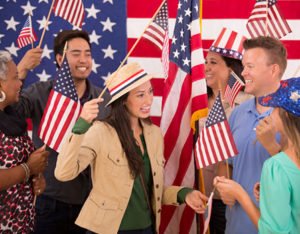 On the legal immigration front, the president issued an EO emphasizing buying and hiring American. However, he also has appointed some high-profile individuals who support increased numbers of “temporary” foreign workers. On the positive side, the administration has signaled it will roll back Obama’s granting of work permits to the spouses of H-1B workers and his extension of OPT (Optional Practical Training) status to some alien college grads working in high tech industries, enabling them to stay to work for as long as 24 months after graduation. He has also eliminated the ability to buy your way to the front of the line for an H-1B.

The extended-family-oriented chain migration system that is contrary to the national interest needs to be eliminated, but this must be dealt with by Congress. But, it appears that the president will be working with Senators Tom Cotton and David Perdue on the RAISE Act, which would move the U.S. towards a more merit-based legal immigration system.

The administration has taken steps to tackle the rampant fraud in the legal immigration system by detailing fraud officers to the border facilities and increasing the number of fraud officers who work on asylum cases. In addition, ICE has been directed to resurrect the important Document and Benefit Fraud Task Forces throughout the country, which work cooperatively to target document fraud rings, immigration fraud schemes, and identity theft problems, all of which are part of the criminal infrastructure that supports illegal immigration and exploitation of our legal immigration system. Further, ICE has been directed to bring more immigration fraud and human smuggling cases to prosecutors. This can be paid for using the bloated slush fund known as the Examinations Fee Account, which presently holds well over $1 billion in reserve.

President Trump addressed national security and “extreme vetting” with an EO, but it was stopped by certain courts in response to lawsuits filed by opponents. But the pause in immigration from countries with high levels of terrorism which the EO called for was never intended as anything more than a place-holder to give the administration time to consider what is required to improve the vetting system.

President Trump is yet to deliver on his promise to roll back the unconstitutional and extra-statutory programs granting a renewable two-year amnesty to “Dreamers”– illegal aliens who came before age 16. USCIS continues not only to renew the status of DACA recipients, but is continuing to approve new applications, actually expanding the number of people covered by this amnesty, which doesn’t just protect individuals from deportation, it enables an illegal alien to get a work permit, a Social Security number, a state driver’s license, and access to certain welfare programs.

THE RULE OF LAW

The administration has also moved toward defunding sanctuary jurisdictions. AG Sessions has moved forward with this by pursuing ten of the most egregious sanctuaries, giving them until June 30 to comply with federal law (specifically 8 U.S.C. 1373) or face losing DOJ grant money. One of these jurisdictions (Miami-Dade County, Florida) has already reversed its policy.

An April court ruling widely described as halting these defunding efforts did no such thing and, in fact, specifically acknowledged that the DOJ grants in question could be withheld.

The administration also created a weekly report listing instances of criminal aliens released by sanctuary cities – naming and shaming – to expose the consequences of sanctuary cities’ defiance of federal immigration law. Although temporarily suspended due to problems with data collection, it is expected to be restarted, and may well prove a potent tool in building political support for confronting jurisdictions.

So how has the Trump administration rated in its initial immigration policy performance? The Center’s assessment exposes, at least with regard to immigration: “What a difference 100 days can make.”

Support Conservative Daily News with a small donation via Paypal or credit card that will go towards supporting the news and commentary you've come to appreciate.
Tags
Illegal immigration Trump Administration

‘Why Didn’t Newsom Mention This?’: DeSantis Fires Back On Attack Ads

Why Are Leftists Fighting ‘Big Oil’ By Gluing Themselves To Things?