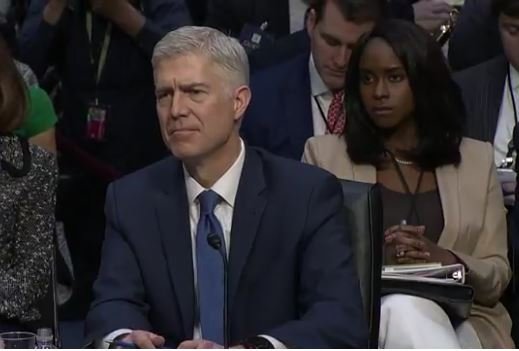 I’ve been watching Judge Neil Gorsuch’s supreme court justice confirmation hearings before the senate and I find myself very, very impressed with this man.

He comes across as a compassionate, easy going, down to earth, soft spoken person while also very sincere, direct, fair yet tough when it comes to the law. I like how he looks directly at his questioners on the senate who are really grilling him with hard questions and comes back at them very respectfully and to the point.

He displays that down home boyish Colorado western charm by tilting his head to the side with a smiling twinkle in his eyes and saying things like, “Gosh senator that was a long time ago,” and saying things like “Gosh Senator I was only applying the law as stated in that case,” He doesn’t seem to get rattled, but you can see the look of frustration and consternation from their questions in his facial expressions and rightly so.

Senator Dick Durbin seemed to go on and on in some of his questions and Gorsuch said to him, “Senator there are a lot of words in what you said and I would like to go back and answer them one by one.” Durbin seemed infatuated with questions about gays and the LGBT community. Gorsuch replied that, “Senator I judge each person as a human being and not associated with any group.” Durbin persisted on bringing up the LGBT group and you can see the look on Gorsuch’s face that seemed to be saying,” I just told you what I believe so where are you going with this?” I was saying the same thing too. Gorsuch repeated over and over that he judges each case individually and each person as an individual not associated with a group. Gorsuch also reminded Durbin that “I don’t make the law, I apply the law” and gave several examples of cases that backed him up. When asked about cases where Gorsuch voted against the majority of his fellow judges in a case Gorsuch said there are some cases you take home with you and think about them.” Gorsuch explained that being a lawyer is a very tough profession as there are a lot of suicides and bouts of depression and alcoholism with that profession. Gorsuch said he would have no problem ruling against the president who appointed him or either party which shows his true impartiality.

He has a remarkable memory when it comes to citing court cases he’s read in books and who was involved in them. Senator John Coryn was a bit nicer in his questioning and asked Gorsuch if he would be prejudiced for a case before hearing it and then work back to justify his decision. Gorsuch replied with a resounding “NO! and if any judge does that they don’t deserve to be a judge” as if annoyed with such a question. Cornyn said he agreed with him and was just asking to see how he would respond.

Judge Gotsuch shows he can be very serious and firm when opposed and very warm and light hearted when recalling stories about his clerking for Justice Byron White when he was questioned by Sen. Ted Cruz. Cruz thanked Gorsuch for his scholarly and erudite answers.

A hearing for a Supreme Court judge is very grueling and personal and can be a real roller coaster for the nominee as it goes on for several days all day long answering questions. I could never do it, but Judge Gorsuch is sailing through and doing fine.

I think Neil Gorsuch is an excellent choice and the senate better confirm him. He’s the right man for the right job at the right time. He’s got my support for sure.

Support Conservative Daily News with a small donation via Paypal or credit card that will go towards supporting the news and commentary you've come to appreciate.
Tags
Neil Gorsuch