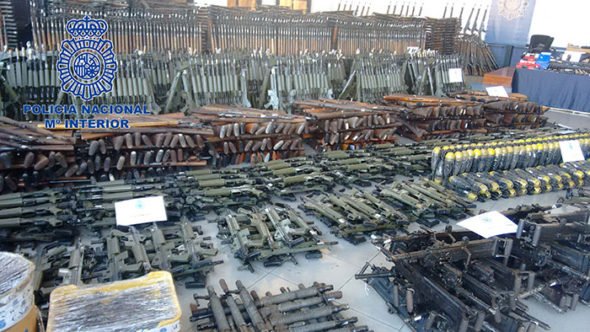 The Spanish National Police has released pictures and video of an arsenal of war seized in January in the Spanish provinces of Bizkaia, Girona and Cantabria, Spain during operation ‘Portu’, supported by Europol. Over 10 000 assault rifles, anti-aerial machine guns, 400 shells, grenades, pistols, revolvers and parts to reactivate weapons, were seized.

Most of the firearms were acquired legally as deactivated firearms but were later reactivated in a workshop also discovered during the operation.

In a statement, Spanish National Police said that “Due to their characteristics, their caliber and their readiness for reactivation, the seized weapons had an easy journey in the black market and posed a significant risk of being acquired by organized crime groups and terrorists.”

The investigation found that the five arms dealers who have been arrested were using a sports shop as a front and were selling firearms in Spain, France, and Belgium using forged reactivation permits.

Operation Portu was started after the terrorist attack on the Jewish Museum of Brussels in May, 2014.