Donald Trump made allegations last week of the Obama Administration spying on the Trump campaign in the heat of the presidential election last year continuing on through December. The mainstream media reacted with shock, claiming the allegations lacked evidence and substance, and counter-alleged that Trump’s assertions were merely “fake news.” Apparently the media magnates don’t read their own papers, for all they would need to do is read their own publications to validate the President’s claims. 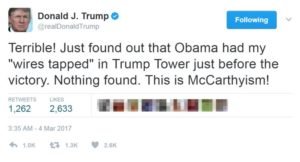 On March 4, President Trump tweeted a series of messages. Although limited to 144 characters per tweet, his message was a shocking one. “Is it legal for a sitting President to be ‘wire tapping’ a race for president prior to an election? Turned down by court earlier. A NEW LOW!” he said initially. The first message was followed immediately with, “I’d bet a good lawyer could make a great case out of the fact that President Obama was tapping my phones in October, just prior to Election!”

His final tweet concluded the allegation, “How low has President Obama gone to tapp [sic] my phones during the very sacred election process. This is Nixon/Watergate. Bad (or sick) guy!” What followed was a flurry of predictable media reactions.

Interestingly, all of those publications have been printing stories over the past several months that provide the very evidence they said Trump was lacking. Just over a month ago, on January 20th, the New York Times’ front-page story was titled, “Wiretapped Data Used In Inquiry of Trump Aides.” That story went on to reveal, “The FBI is leading the investigations, aided by the National Security Agency, the CIA and the Treasury Department’s Financial Crimes Unit. The investigators have accelerated their efforts in recent weeks but have found no conclusive evidence of wrongdoing, the officials said. One official said intelligence reports based on some of the wiretapped communications had been provided to the White House.”

In that one story, the NYT validates the following: that Trump aides were being wiretapped; data from the wiretaps were gathered; which government agencies (under the Obama Administration) were involved; that they’d accelerated their efforts (likely to forestall Trump’s inauguration); and that some of the data had been provided to the White House. And perhaps most significant, as far as Trump and his aides are concerned, they “found no conclusive evidence of wrongdoing.”

Following Trump’s tweets an Obama spokesman declared, “Neither President Obama nor any White House official ever ordered surveillance on any U.S. citizen. Any suggestion otherwise is simply false.” Please note the wording, claiming they didn’t “order” the wiretapping. Was it perhaps suggested, intimated, or simply allowed? That’s unknown, but clearly Obama’s White House knew what the results of the wiretap were. And that’s according to the NYT. And frankly, if there was no wiretapping, there would have been no data to share with the White House. 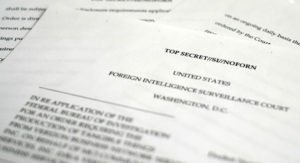 Trump’s first tweet that morning intimated involvement of FISA (Foreign Intelligence Surveillance Act) court involvement in the wiretapping of the Trump Tower in New York. Even that is validated by, not Trump tweets or administration officials, but by the media.

According to news site Heat Street, “Two separate sources with links to the counter-intelligence community have confirmed to Heat Street that the FBI sought, and was granted, a FISA court warrant in October, giving counter-intelligence permission to examine the activities of ‘U.S. persons’ in Donald Trump’s campaign with ties to Russia.”

The article continues, “Contrary to earlier reporting in the New York Times, which cited FBI sources as saying that the agency did not believe that the private server in Donald Trump’s Trump Tower which was connected to a Russian bank had any nefarious purpose, the FBI’s counter-intelligence arm, sources say, re-drew an earlier FISA court request around possible financial and banking offenses related to the server. The first request, which sources say, named Trump, was denied back in June, but the second was drawn more narrowly and was granted in October…While the Times story speaks of metadata, sources suggest that a FISA warrant was granted to look at the full content of emails and other related documents that may concern US persons.”

And inexplicably, in the final days of his administration, President Obama in January “expanded the power of the National Security Agency to share globally intercepted personal communications with the government’s 16 other intelligence agencies before applying privacy protections,” according to the New York Times. Obama’s directive expanded Executive Order 12333. As the Times reported, they “found no conclusive evidence of wrongdoing.” Yet, based on much of the information being leaked, it was obviously not just data and factual information that was shared, but also rumor, innuendo, and hearsay; in short, political propaganda.

The facts clearly lay out a systematic series of events and intelligence-gathering efforts where the Obama Administration was wiretapping and monitoring Trump and his associates in the midst of the presidential campaign. This is further confirmed and validated by the well-placed leak from the FBI of the discussions between erstwhile National Security Advisor, Michael Flynn, and the Russian Ambassador to the U.S. 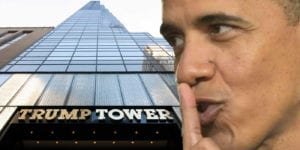 Clearly, based on news stories by the same media that is now denouncing Trump’s allegations, the Obama administration actively sought authorization to eavesdrop on the Trump campaign, and was eventually granted that authorization. They continued to monitor the Trump campaign even after no evidence of wrongdoing was discovered. Obama then relaxed the national intelligence rules to allow evidence to be shared broadly within the government, virtually assuring that such information would be leaked to news sources.

Some claim this to be merely attempts at obfuscation of the “Russian meddling” in the campaign. This is highly unlikely since the only thing the FBI and the other 16 intelligence agencies have produced for all their efforts to link Trump to purported Russian hacking of the Hillary campaign, is the leaked Michael Flynn conversation with the Russian Ambassador. Even the allegations against Attorney General Jeff Sessions are moot since his first meeting with the Russian Ambassador included several high-ranking U.S. military officers, and the second was at an event organized by the Obama Administration. 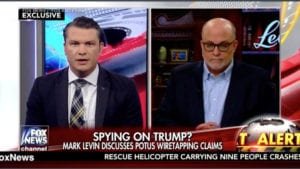 Some, including Mark Levin, former chief of staff to Attorney General Edwin Meese in the Reagan Administration, claim the Obama Administration’s targeting of the Trump organization, in the middle of a presidential campaign, was a more egregious abuse of executive power than Nixon exercised with the Watergate break in. He avers that it was tantamount to an attempted coup to prevent Trump from assuming office.

Regrettably, many government employees, who overwhelmingly are supportive of Democrats, are involved in the efforts to undermine, discredit, and delegitimize the Trump administration. These “public servants” who by a nearly 10:1 margin donated to the Clinton campaign, are obviously more loyal to their party than they are to the nation they are paid to serve. They are committing felonies with their leaks to the press, and arguably committing treason and sedition in attempting to destabilize the government. 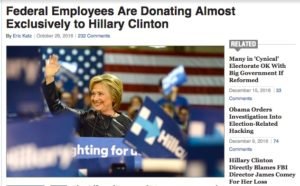 These “deep state” government employees, including some in the intelligence services, are evidently colluding with three other factions in a veritable war against our democratically elected President. The others include, as one commentator refers to them, the “Snowflake Faction,” including paid protestors; the Democrat Party; and the mainstream media establishment. They are not just striving to discredit the President, but to destabilize the administration and destroy him utilizing every conceivable means available to them to do so.

The question is not whether the Obama Administration was spying on the Trump campaign, but how many laws they bent or broke for nearly exclusively political purposes in doing so, and whether anyone will be held accountable for it. The Watergate scandal pales by comparison.

Support Conservative Daily News with a small donation via Paypal or credit card that will go towards supporting the news and commentary you've come to appreciate.
Tags
domestic spying Obama administration wiretap