In the past BGAV’s Disaster Response teams performed a valuable service and Christian witness. During my training session we were told BGAV sent mobile kitchens during Baltimore’s unrest to prepare meals for police and National Guardsmen. 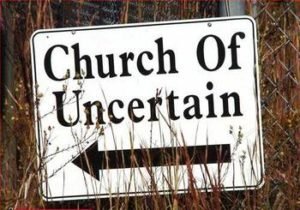 I’m not sure that will be the emphasis in the future. Judging by the BGAV’s latest outreach partner, the next time mobile kitchens head for Charm City it will be to feed the rioters.

Jesus was notorious for demanding his disciples change everything, including names. But I seriously doubt Evangelicals who voted 81 percent for Trump are going to be willing to change allegiance to George Soros on the say–so of the hard–left cadre staffing the conference.

I’m trying to picture the church ladies who attended my disaster–training enjoying these conference sessions:

On the plus side, after sitting through those harangues attendees will have enough personal guilt to convert to Catholicism, if they remain Christians at all.

If this were a Unitarian or Unite conference it would make perfect sense, but Baptists? The agenda, Biblical beliefs and political orientation of the conference apparatchiks are completely at odds with every Southern Baptist church I’ve attended.

In many instances what these practitioners believe is heresy in any mainline Baptist church.

I have a strong suspicion the one word Dr. Herbst thinks God speaks on immigration is “amnesty,” particularly since he’s a religion professor that evidently doesn’t believe the unborn have a “God–given right to life.” Amnesty is also pretty much a sure thing for Miller who writes for G92.org. Slogan: “Immigrants Aren’t Illegals.”

Harris has a surprise in store for law–and–order conservatives since it’s his belief there’s a strong link between support for capital punishment and lynching. Even being opposed doesn’t let white Baptists off the hook for a hanging judge like Harris. He contends, “…generations of white privilege and black under-privilege have shaped society such that whites are often numb to the reality of their disproportionate privilege to blacks.”

So take that, white Obama voters.

Something tells me Willson isn’t really quite ready to go “beyond white guilt.” His Facebook page reveals an aggressive leftist who despises Trump supporters. He contends, “The rise of evangelical support for Donald Trump reveals, quite visibly…the dearth of compassion among American Christians.”

If Willson ever gets tired of the church, he can always minister to “Occupy.” He’s described as a “Red Letter Christian” and red is right. Willson is “pro–choice,” supports homosexual “marriage” and is active in the anti–police Black Lives Matter movement.

Casselberry is another leftist eager to start the ball rolling on after–election reconciliation. His poem “American Delusion” says it all:

“The American dream is an illusion

a Trumped up delusion

A legacy of terror we still refuse to see

Land of the free?

Home of the slave and the lynching tree.”

Officially sponsoring a conference where devoted, church–going Baptists will be dropped into a cauldron of seething leftists is so unbelievable I thought maybe the decision to join this collection of cultural Marxists was the action of a young staffer who didn’t know better and had to justify the “COEXIST” sticker on her car.

So I repeatedly called BGAV Exec. Director John Upton to find out if sponsorship was simply a failure to do basic research. Unfortunately Upton has fallen victim to the form of pride that says since I’m doing God’s work, there is no need to observe minor social niceties. Upton refused to speak with me and explain BGAV thinking.

The official BGAV sponsorship of a divisive, anti–American, heresy–spouting group of propagandists is an insult to the believing Baptists who fill the pews each Sunday and donate to missions.

Believers typically assume denomination leadership reflects the Bible as it’s written and the wishes of the membership. That’s not always the case. In Virginia it’s time to stop being as innocent as doves and start being as wise as serpents. A good place to begin would be by withholding personal and their churches’ financial contributions to the BGAV.

The Feast of Saint Stephen, The First Martyr & The Holocaust