There’s been a great deal of controversy regarding who is going to pay for Trump’s border wall. The option that’s most popular is sending Mexico a bill. This would require the man Mark Steyn calls “President Piñata” to bring a big check to the groundbreaking ceremony or possibly pay on the installment plan — like rent–to–own furniture in an illegal’s crash pad. 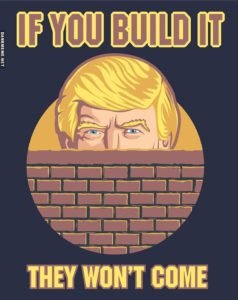 Should the Mexican check not materialize or if it bounces like a jumping bean there are alternatives. Oklahoma has a remittance tax that puts a one percent fee on all wire transfers sent out–of–state. According to the Center for Immigration Studies a similar US tax would mainly fall on illegals and could bring in between one a two billion dollars a year.

More than enough to pay for the wall with some left over for environmental stalling studies.

Or there’s always the even more controversial tariff on imported Mexican goods.

Frankly, I don’t care who pays as long as the wall is built, but my wife did have an innovative idea to provide seed funding while details on the larger payments are worked out. It has the dual advantage of not requiring tax dollars and proving to the opposition media there is broad–based support for Trump’s wall.

She wants Trump to sell individual bricks or cinder blocks to Americans who want a part of the wall for themselves. The American public made it possible to tear down the Berlin Wall that kept Germans in; why not let them make it possible to build the border wall to keep illegals out?

This is an ideal solution for a capitalist entrepreneur like the president. Each commemorative block could contain a message from the donor. It could be something as simple as “Thank you President Trump” or pointed as “Why Isn’t Ted Kennedy Buried Under this Wall?”

Her original idea was more specific regarding sales. She thought victims of crimes committed by illegal aliens would be happy to buy a brick. I like this, too, although I would have a sliding price scale for each brick depending upon the crime involved. I think the two bricks I buy for friends killed by drunken illegals should get a discount, while the man who wants to immortalize “I was frightened by illegals in the 7/11 parking lot” should pay full freight.

The brick commemorating my daughter’s car that was totaled by an illegal would fit somewhere between the two extremes.

Trump could save on construction expenses by requiring all illegals in federal detention be put to work building the wall inspired by their law breaking. The symmetry certainly has its appeal. Currently there is no real penalty to being repeatedly caught violating our border, other than processing delays before Obama holdovers send you north.

A few months operating a shovel for free might serve as a real deterrent.

If the brick idea doesn’t appeal to the White House, how about taking the money Trump doesn’t send to Sanctuary Cities and spend that on the wall? The solution is a twofer: Financing and poetic justice.

Until recently I’ve been stumped trying to understand the motivation behind declaring one’s city a safe haven for lawbreakers. Why should the Mexican who steals privileges that don’t belong to him get a free pass and the citizen who steals a cellphone be arrested?

What possible benefit is it to law–abiding residents for elected officials to encourage the in–migration of a criminal underclass? Unless the underclass is all in the backyard, celebrating Cinco de Mayo with the rest of the family.

California State Senate President Pro Tem Kevin De Leon introduced a bill to make the entire state of California a Sanctuary, because “half of my family would be eligible for deportation under [Trump’s] executive order.”

De Leon is more than willing to risk forfeiting millions of dollars in federal money if it means he won’t have to travel to Matamoros to enjoy grandma’s tamales.

It’s also De Leon’s belief that if Americans can donate half their insurance premiums to pay for Obamacare coverage for someone else, they should have no problem splitting their identity with a “hard working” illegal. After all De Leon contends identity theft is “…what you need to survive, to work in this country.”

De Leon and the rest of the illegal enablers participating in a conspiracy to obstruct federal law are not only importing members of their tribe at the expense of citizens, they also appear to be importing the corrupt Mexican politics the “refugees” are supposedly fleeing.

Support Conservative Daily News with a small donation via Paypal or credit card that will go towards supporting the news and commentary you've come to appreciate.
Tags
amnesty deportation Illegal Aliens Mexico