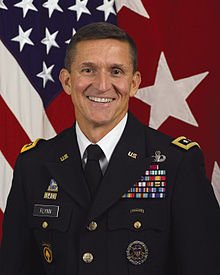 The latest indications from the White House are that President Donald Trump’s National Security Advisor Michael Flynn may be on the way out.

Other reports out of the White House have indicated that the President is “evaluating” the Flynn issue.

Flynn had spoken to the Russian ambassador to the United States on the same day that President Obama put sanctions on the Russian Federation for alleged “interference” in the U.S. Presidential election.

Flynn had told Vice-President Pence that he did not discuss the sanctions with the Russian diplomat which Pence then espoused in public.

The call was recorded, and reports indicate that some mention of the sanctions may have occurred which would mean that Flynn lied to Pence.

Until the details come out, it will be difficult to know if this is a hit-job by the media or a genuine ethics violation and real betrayal of the President’s trust.

Support Conservative Daily News with a small donation via Paypal or credit card that will go towards supporting the news and commentary you've come to appreciate.
Tags
Michael Flynn Trump Administration