It was truly shocking to observe the posthumous praise heaped upon Fidel Castro this past week upon announcement of his death. Major “news” outlets, celebrities, and politicians lavished the now deceased leader with praise and accolades that, absent knowledge of the tyrant he really was, might lead a more gullible populace to believe he was Sister Teresa’s brother. Those heaping such adulation upon the dictator’s death were invariably liberals, which causes any sentient being to wonder why the left is so enamored with totalitarian dictators. 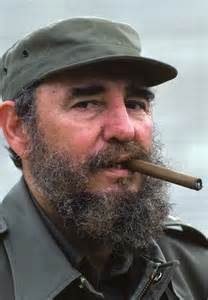 The Los Angeles Times’ initial Tweet announcing Castro’s death referred to him as a “charismatic icon.” National Public Radio called him, “one of the most inspiring leaders of the 20thCentury.” The Washington Post called him a “spiritual beacon for the world’s political far left.” Former presidential hopeful Rev. Jesse Jackson called on Americans to celebrate the life of Fidel Castro, calling the deceased Cuban dictator a “freedom fighter” and “poor people’s hero.” Oliver Stone has called him “one of the Earth’s wisest people, one of the people we should consult.” President Obama declared, “History will record and judge the enormous impact of this singular figure on the people and world around him.”

History has indeed recorded what kind of ruler Fidel Castro was, and for all but the most devout socialist ideologues, he’s judged to be a tyrannical despot who denied the most basic human rights and freedoms to his people. He executed at least 582 members of the Batista regime by firing squads over two years. He shuttered independent newspapers and herded homosexuals into camps for “re-education.” According to the Committee to Protect Journalists, Cuba trails only China in the number of journalists and reporters behind bars.

In 1964, Castro acknowledged holding 15,000 political prisoners. Hundreds of thousands of Cubans fled, including Castro’s daughter Alina Fernandez Revuelta and his younger sister Juana. Labor unions lost the right to strike and the Catholic Church and other religious institutions were harassed. Neighborhood “revolutionary defense committees” spied on everyone. Privacy, freedom, and basic human rights were abolished.

In his 50 years in power, he was directly responsible for the deaths of up to 100,000 people, which on a per capita basis, makes his blood-thirsty regime more oppressive and genocidal than Hitler’s Nazi Germany. Castro’s dream of making Cuba a communist utopia was only an illusion, as it instead became an island of atrocities, poverty and staggering human rights abuses. In actuality, nothing else could be expected from a tyrant steeped in the totalitarian doctrines of a socialistic ideology.

The repression and oppression of Fidel’s regime can be quantified, and has been by the world’s foremost institutions tracking human rights abuse. The United Nations Human Rights Index, Freedom House’s “Freedom In The World Database,” Heritage Foundation’s “Index of Economic Freedom,” and the Press Freedom Index are unanimous in their ranking of Cuba in the same class as North Korea and Sudan as the most oppressive regimes. 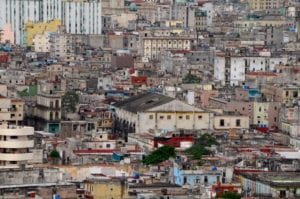 When Fidel’s “accomplishments” are enumerated, it is completely incomprehensible why anyone would sing his praises, especially those on the left who seem to think those are the kinds of things Donald Trump will do as president! From a logical and ethical perspective, the left’s adulation of Fidel represents an intellectual incongruity and duplicity that defies reason.

In short, under Fidel Castro, a once-flourishing island paradise has been transformed into a poverty-stricken, desolate hellhole where basic human liberties do not exist.

In spite of all this, liberals, American media and the Hollywood effete elite heap praise and adulation on Fidel. Why is it that to the left a ruthless mass-murderer and totalitarian dictator would be so adored and worthy of emulation? For that matter, why is Castro’s primary executioner of the revolution, Che Guevara, still lionized by the left? Even today, kids wear T-shirts with his gnarly image emblazoned on them. Even Angelina Jolie has a Che tattoo, which is immensely ironic considering she used to travel the world denouncing violence as a U.N. ambassador of good will. 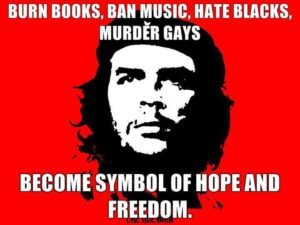 Che longed to destroy New York City with nuclear missiles. He promoted book burning and signed death warrants for authors who disagreed with him. His racism against blacks makes Jeremiah Wright’s racism against whites pale by comparison. He persecuted homosexuals, long-haired rock and rollers, and church-goers. Daniel James writes that Che himself admitted to ordering “several thousand” executions during the first few years of the Castro regime.

When analyzed objectively, the left in America should despise Castro and Guevara. After all, they have done all the things they claim to despise: torture, capital punishment, imprisonment without due process, elimination of freedom of speech and the press, criminalization of homosexuals, etc. ad nauseam.

There are two possible reasons the left adores such tyrants. The aforementioned hated the United States. In 1957, Castro wrote in a letter, “War against the United States is my true destiny. When this war’s over (the revolution), I’ll start that much bigger and wider war.” Maybe the reason the radical left loves those murderous dictators and Castro’s executioner is because they all share a disdain for the United States.

The other possibility is that the left more frequently judges people for their intent than their actual accomplishments, or what they do in reality. Since their intent was to establish an island socialist paradise based on Marxist ideals, it doesn’t matter than they in reality created an island prison devoid of basic human rights, and ripe with tyrannical oppression. This ideological sympathy based upon a cult of personality afflicts American liberals with a severe myopia, disallowing an objective assessment of their atrocities and oppression.

In their selective tolerance of ideologically aligned despots’ abuses, the radical left in America hypocritically denies the factual and historical, and through transference seems to ascribe such tyrannical characteristics to their assumed domestic “enemies” – the American right. They ignore the facts, “clinging bitterly” to a fallacious idyllic image of a despot, and in the process, employ a sort of despicable apologetics for totalitarianism. Truly an intellectual disconnect from reality.

Support Conservative Daily News with a small donation via Paypal or credit card that will go towards supporting the news and commentary you've come to appreciate.
Tags
Fidel Castro Politics