The mainstream media narrative regarding “fake news” is awash with duplicity, and frankly, they seem to be the main purveyors of it. Case in point, fully half of Hillary Clinton voters have been deceptively convinced by the media, that Russia “tampered with vote tallies in order to get Donald Trump elected President,” according to a poll conducted by YouGov and The Economist last week. 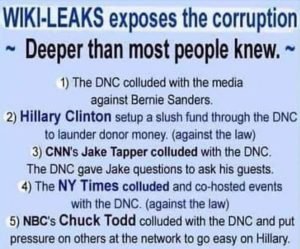 And what’s even more disturbing is that some elements within our own Central Intelligence Agency added fodder to their fake news. A purported “leak” (more correctly referred to as ideological propaganda) from sources within the CIA seemed to lend credibility to the claim of Russian chicanery in the U.S. election.

There are many problems with this narrative, all of them based on the false premise of a “Russian hack.” But let’s start with the nature of the information made public by Wikileaks. There is no dispute to the authenticity of the emails from Hillary, her campaign manager John Podesta, and other DNC officials. No one, even the Democrat National Committee (DNC) disputes the content of the emails, which factually represents the collusion, deceit, and corruption seemingly endemic within the organization. Since no one at the DNC, even Hillary herself, has disputed the contents of the now public emails, their authenticity is obviously not in doubt. Therefore, the public was simply provided more primary source information depicting the degree of corruption within the organization. Since when is factual information a bad thing, especially leading into an election? 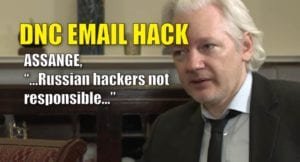 Then there is the actual source of the “leak.” The DNC has claimed they were “hacked” by the Russians, an allegation all too anxiously parroted by the mainstream media. Julian Assange, the founder of Wikileaks, has made it clear that the Russians were not the ones who provided the email database to them. He said, “That is the circumstantial evidence that some Russian, or someone who wanted to make them look like a Russian, was involved, with these other media organizations. That is not the case for the material that we released.”

It was actually a former British ambassador who was provided the material Wikileaks released. Craig Murray, a former intelligence analyst and former ambassador to Uzbekistan who is also a close associate of WikiLeaks’ founder, told the UK’s Daily Mail, that he “flew to Washington for a clandestine handoff with one of the email sources in September. He said he received a package in a wooded area near American University.” He said that he received the data from a “disgusted” Democrat Party whistleblower, someone within the DNC. In light of this fact, it’s little wonder that the DNC would continue to push the “Russian hacker” narrative.

Murray went on to say, “Neither [of the leaks] came from the Russians. The source had legal access to the information. The documents came from inside leaks, not hacks,” according to Murray, as quoted in the British newspaper. 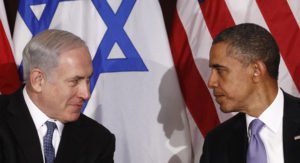 What’s almost humorous about this is President Obama’s reaction. He has stuck by his fraudulent “Russian hacker” tale, even going so far as to threaten retaliation against the Russian government for something they didn’t even do. But we must remember that Obama himself attempted overtly to manipulate and influence a foreign country’s election, just a year ago.

In 2015, Israel was going through their own election season. Obama, no fan of Prime Minister Benjamin Netanyahu, authorized the State Department to donate U.S. taxpayer money ($300,000) to a “pro-peace” Israeli group, which in turn paid political activists (community organizers) dedicated to defeating Netanyahu. We’re accustomed to duplicity from our 44th President, but to denounce a foreign government for something they had no hand in, for doing something that Obama himself has done overtly, sets a new standard for duplicity. We ought to recall, as well, that in 1984 when Sen. Ted Kennedy (D-MA) was running for president, he actually asked for Soviet help. 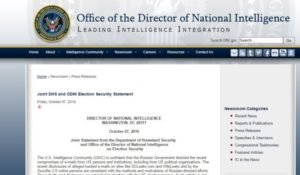 The mainstream media has attempted to lend credibility to the “Russian hacker” fable by citing unnamed CIA sources that allege it was the Russians, and that they were attempting to influence the election. What’s interesting about this component of the tangled web of misinformation is that the Office of the Director of National Intelligence (ODNI), headed by James Clapper, has not endorsed what some within the CIA have alleged. They didn’t buy it. Neither did the FBI.

As a matter of fact, when the House Permanent Select Committee on Intelligence scheduled a special closed-door hearing on the issue of Russian interference in the election, no one from the ODNI (which oversees 17 intelligence gathering organizations within the government), or the CIA, had the temerity to show up. The hearing was cancelled because no one in the intelligence community would, or could, back up the allegation.

Since the DNC is in apoplectic shock over Hillary’s defeat, they have done everything possible to throw doubt on the legitimacy of Donald Trump’s historic election. This is just one of many such attempts at delegitimization of the Nov. 7 election results. This is also immensely ironic when we recall the media and leftist frenzy over Trump’s concerns about a “rigged election,” and whether he would accept the results or not. Now it’s those on the left, including the media, who can’t accept the results, and have been gullibly fed enough disinformation from the media to believe it was “rigged” by the Russians. The only “rigging” was done by the DNC both in the primaries, and in some states, as the Michigan recount proves.

And finally, none of our election processes or operations were hacked or manipulated by the Russians, either, although there were attempts, but not by Russia. Georgia, West Virginia, and Kentucky election officials revealed after the election that they detected attempted breaches of their state election computers. They were able to trace the IP address and found that it belonged to the Department of Homeland Security (DHS). So it appears that the only attempt to hack the actual election was by our own government, or more specifically, Obama’s DHS.

For those of us who cherish our democratic process, we can be grateful that those rogue CIA sources who attempted a coup against a U.S. President-Elect were less successful than their last one, against Muammar Gaddafi in Libya five years ago. We can also be grateful that even with the collusion of the mainstream media in this fake news, it didn’t gain sufficient traction to sabotage our electoral process.

Support Conservative Daily News with a small donation via Paypal or credit card that will go towards supporting the news and commentary you've come to appreciate.
Tags
2016 Election News 2016 Presidential Election WikiLeaks