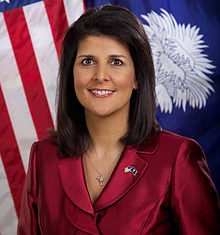 South Carolina governor Nikki Haley has been selected by President-elect Donald Trump to be the United States’ ambassador to the United Nations.

An official announcement from the Trump office is expected on Wednesday.

The daughter of Indian immigrants and South Carolina’s first woman and minority governor, Haley had stumped for Marco Rubio and endorsed Ted Cruz during the presidential campaign.

Haley toned-down her dislike of Trump as the election neared telling reporters that she would be voting for him.

After Trump won the election, Haley said, “I’m just giddy, and if you talk to any of the governors here, we are so excited at the possibility and the opportunities that are going to be here.”
Support Conservative Daily News with a small donation via Paypal or credit card that will go towards supporting the news and commentary you've come to appreciate.
Tags
Nikki Haley The United Nations Trump Administration