For the second time in as many months, a critical pipeline has been shut – this time due to a deadly accident. The shutdown and repairs are expected to cause price spikes and possible shortages in the Southeast and along the Atlantic coast.

The Colonial Pipeline exploded when a nine-man subcontracting crew struck the line with heavy equipment. One person has died and 6 others were injured in the blast.

Differing reports say that the explosion happened between one and five miles to the west of where a spill shut the same pipeline down in September. 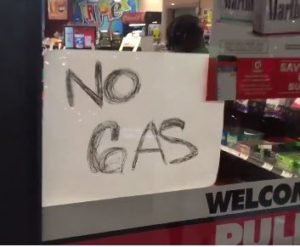 Long gas lines, empty gas stations, and frustrated drivers were the result of the late summer outage and many expect the same from Monday’s accident.

U.S. Gasoline futures rose 11% Tuesday morning as the specter of another shortage hit the markets.

Gasoline supply experts advise drivers to fill up now and drive less until the pipeline is repaired.

The Georgia AAA warns that the explosion is ” likely to cause surging fuel prices across the Southeast.”

Support Conservative Daily News with a small donation via Paypal or credit card that will go towards supporting the news and commentary you've come to appreciate.
Tags
Alabama Colonial Pipeline gas shortage gasoline