The notion that Hillary Clinton is a role model for young American women is yet another testimony to the moral decline of America — not to mention to the moral state of the American Left and the Democratic Party. That is from an article in Real Clear Politics.

I have to agree, Hillary is a compulsive liar, she is corrupt, dishonest, has a mouth worse than a truck driver, and she has no core values; she will say and do anything just to get elected. She is an unethical woman who, mounting evidence indicates, sold her country’s interests for her and her husband’s personal and political gain.

Only those who are in denial can continue to reject the overwhelming evidence that Hillary is a crook, a person prone to chronic lying, and worst of all, one who betrayed America’s best interests so she could line the pockets of her and her husband, who by the way was convicted of perjury and had his law license taken away.

Now we find out that the FBI says that there is a 99% chance that as many as five enemy countries have hacked her private e-mail server, putting America and those who serve our country in danger. How can anyone trust this woman to sit in the Oval Office with knowledge of America’s top secrets and classified information?

Clinton supporters, especially women speak of Hillary with pride. They actually say that they yearn for her to be president so she can serve as a role model for young American women, please don’t make me barf.

I have a 3 year old granddaughter and there is no way in hell I would hold Hillary up as a role model to her. As a matter of fact I wouldn’t even mention Hillary’s name in front of her. Look, Donald Trump may have said a lot of bad things, but Hillary has done a lot of bad things. On the other hand, I would without a doubt hold Donald Trump as a role model for my granddaughter. A successful businessman with companies around the world, I would rather she be like him than her.

I read an article where they compared the Clinton family to the Gambino crime family, at least with the Gambino’s you know what you are getting, and I thing the Gambino’s should be offended. 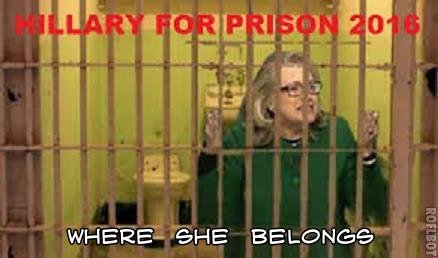