Anyone with half a brain knows our country is hanging on a string, traditional America is disappearing before our eyes, Obama has seen to that. If Hillary wins the election we can expect her to follow in the Liberal-Progressive mold that Obama has put in place. Although I don’t think that Hillary is as Liberal as Obama, I do think that she will keep trying to fundamentally change America to be not America.

How can anyone deny that Hillary is a compulsive liar, she is corrupt, she is dishonest and a hypocrite. It also seems she has a memory problem, when asked about her private server by the FBI, she said 21 times I don’t remember. This woman would not know the truth if it sat on her lap.

Now that we have seen the WikiLeaks papers, we have a better insight of what is really going on in the mind of Hillary.

We can expect the war on religious freedom to continue. Ever since the 2012 Democratic Convention when they tried to eliminate God from their platform it was obvious their goal is to have a Godless society. Now that we see that they want a revolution to overthrow Catholics because of their beliefs, you can see what direction they want society to go.

Hillary wants open boarders, anyone could come and go as they please, which means we will no longer have a country. Drugs can pour in, terrorists can pour in, and criminals can pour in. We also see what she thinks about the refugee problem, she says it is impossible to vet them all, how many terrorists are coming in with the flow now and how many will there be in the future? She said she wants “a hemispheric common market with open trade and open borders.”

We can expect Political Correctness to flourish which means the truth will no longer be accepted. Our colleges will continue with producing little dictators, just look at college students today, they won’t allow any speech that disagrees with their own beliefs. If students don’t tow the Liberal-Progressive agenda they are persecuted, professors are in lock step; as a matter of fact they will give students who don’t agree with them failing grades.

Hillary admits that she is a two faced liar who can’t be trusted to tell the truth to the American people. “It is unsavory, and it always has been that way, but we usually end up where we need to be. But if everybody’s watching, you know, all of the backroom discussions and the deals, you know, then people get a little nervous, to say the least. So, you need both a public and a private position.”

Partial birth abortion will become the law of the land; Hillary thinks it is ok to kill a baby right before birth.

The Second Amendment will be in danger; she has already said that she would use executive orders to keep people from getting guns.

Corruption will continue under Hillary, she will sell the White House just like she put the State Department up for sale. Donald Trump said it best, he made his money building a business, Hillary never built anything, never created one job, never produced a product yet she is worth over 140 million dollars, how did that happen?

Expect more police officers being shot with more riots to follow, Hillary aligns herself more with criminals and the black lives matter idiots then she does with law enforcement.

The most important will be the selection of Supreme Court judges, she will probably appoint at least three judges during her term, with that America will be lost for generations. I have a granddaughter with another one on the way; I want them to grow up in a free America like the one I grew up in. But if Hillary is elected they will grow up in a big government America with a lot less freedoms, and I don’t want that for them.

The most deplorable thing that Hillary has done was lie to the family members of the men that died in Benghazi because of her incompetence. Blaming it on a video when she knew it was a planned terrorist attack is truly despicable.

I believe Hillary is a danger for our country; she is concerned only for her self preservation. She has already said that she is out of touch with the middle class, which means she will take care of herself and the special interests and big money donors. I pray that she will lose. 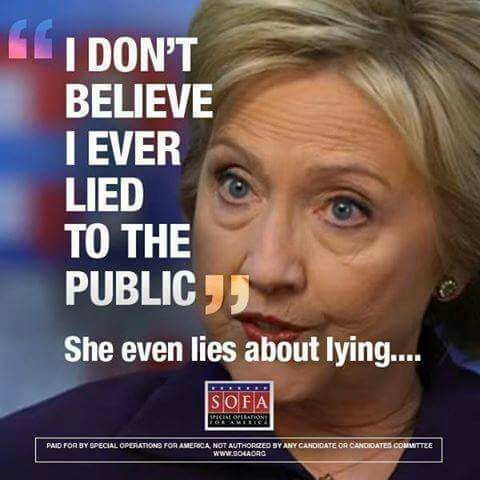