Seven years ago a wave of discontent washed across the fruited plains of America, disgusted with the direction the country was headed. Now, approaching the 2016 election, there is little sign that the Tea (Taxed Enough Already) Party movement ever existed. But if ever there was a time that it needed to be resuscitated, it is now, on the eve of another four to eight years of federal government oppression and dilution of individual liberty! 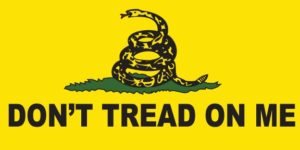 The groundswell of opposition to Obamacare; the burgeoning debt weighing down the nation; the high levels of taxation to service that debt and expanded government spending; and the escalating oppression of coercive government measures restricting individual liberty, fomented the grassroots movement. With no leader spearheading the opposition to Obama regime policies, it truly was a grassroots movement; a veritable groundswell of common Americans rising in fervor averring their “inalienable rights” of “life, liberty, and property.” They were patriots disgusted with their republic being hijacked by a government obviously committed to principles antithetical to our founding documents. 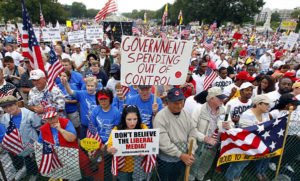 There was a certain sense of empowerment and cohesiveness at the rallies across the nation at the time. For many, it seemed comforting to know that they weren’t alone in feeling like our country is being steam-rolled to a socialistic state where those of us who work hard to provide for our families are shouldering the costs of an out-of-control spending machine in Washington. Tea Partiers were unified against expansion of government, encroachment into the private sector, restriction of freedom, and against the massive taxes required to pay for all the spending being done in Washington.

The spirit of the movement nationwide was well represented by some of the signs hefted by real participants with the movement. One very young protestors sign said, “My future is being mortgaged,” and another, “Why do I feel like a ship passing by Somalia?” an obvious metaphoric comparison of government actions to piracy,” and another “Tell the politicians to cut their budgets; we’re already cutting ours.” 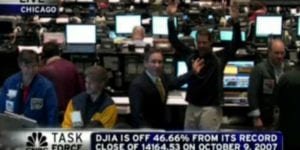 In February 2009, I watched the live CNBC report by Rick Santelli from the floor of the Chicago Board of Trade in amazement as he launched into a diatribe against Nancy Pelosi’s Congress and the President for their plan to reward bad behavior by having fiscally responsible citizens help pay the mortgages of those who have been less responsible. Santelli said maybe it was time to consider another Tea Party symbolizing our collective disapprobation of the tax-and-spend mentality dominating Washington.

Traders on the floor cheered him on (mind you, the CBOT is based in Chicago, not exactly the heartland of conservative political values). as he pled to the camera and viewers, “President Obama, are you listening?” From that heartfelt plea by a single citizen, a nationwide grassroots movement was spawned.

At this point in time, it appears that the Tea Party movement was simply a flash in the political pan. We are a mere shadow of what we were but a few years ago. And the political impact at the time proved to be ephemeral, as Washington has been largely impervious to pleas of restraint and discretion in spending, taxation, and constricting individual liberty. 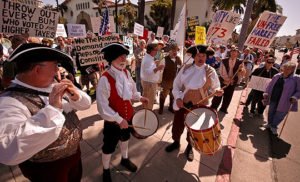 Now, after eight years of an administration intent on “fundamentally transforming America,” and facing the prospect of perpetuation of those same policies, the need is even greater for that grassroots movement to rise up to action to defend the republic and safeguard individual liberty. Polling data confirm that over 70% of Americans feel the nation is headed in the wrong direction. And if that’s the case, the last thing that should happen is the election of a new president, or congress, who would continue the current path, and perhaps more onerously so.

The need for this to be a perpetual political factor is no less than it was for the original tea party was to the establishment as an independent republic. It took just two-and-a-half years from the symbolic Boston Tea Party of 1773 to the Declaration of Independence, breaking the stranglehold of British crown tyranny from the colonies. If their convictions had waned, we could still be a British colony.

Likewise, if the Tea Party movement is to have any lasting effect in the 21st century, our convictions must be as steadfast and unwavering as those brave patriots from the 18th century. We’ve already seen what can happen when we vote in unity against those who want to transform the nation. The midterm elections of 2010 resulted in a seismic and historic shift, as many of Obama’s enablers in Congress were ousted, and the pendulum swung decisively to the right.

And for those who are critical of congress for not completely thwarting the transformative policies of the 44th president, just think how much worse it could have been with Nancy Pelosi and Harry Reid at the helm of congress for the past few years! Most of what has been done by the executive branch the past six years has been by Executive Order, which can be reversed by any subsequent president. That should begin in January of 2017. 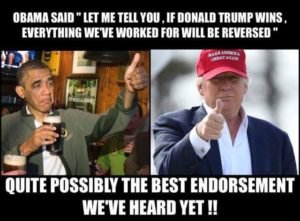 There is only one way to prevent the policies of the past eight years from having extended life, and that is to prevent another Clinton presidency. As unpalatable as it may be to many, there is only one person who is in a position to win who could stymy it, and that’s the GOP nominee. Many in the movement wanted a political outsider, and that’s what we have, in spite of all his personal flaws and imperfections. He may not completely reverse the current trend, but he can thwart it. It’s time for the Tea Party movement to arise again, as a groundswell, and reject the statism of Obama and Clinton, and reassert liberty!

Support Conservative Daily News with a small donation via Paypal or credit card that will go towards supporting the news and commentary you've come to appreciate.
Tags
2016 Presidential Election Tea Party Patriots