I read a little story the other day that made me sit dumb founded shaking my head. We have a world exploding, terrorism is everywhere, our economy is in the tank, we are on the verge of having a race war in this country yet the biggest concern for some women is yoga pants, you read that right, yoga pants.

It seems that a man in Rhode Island named Alan Sorrentino recently penned a letter to the editor of his local paper on the pressing subject of women wearing yoga pants. Alan sent in his largely tongue in cheek letter to The Barrington Times complaining that the workout apparel was tacky and ridiculous, best suited for the confines of a yoga studio, and not something to be worn by women over the age of twenty.

Alan Sorrentino says the response to the letter to the editor, printed in The Barrington Times Wednesday, has been “vicious” and that he’s received death threats. He implored marchers to stay away from his home and maintained the letter was meant to be humorous. Sorrentino told WPRO-AM the letter was meant to be a humorous break from the current political campaign rhetoric and that he doesn’t really have an issue with yoga pants. He says he even owns a pair.

Don’t these women have anything better to do with themselves? Do they have children to take care of, maybe a job, or a pie in the oven or something? Anything would make more sense than protesting about a letter about pants, after all the man wrote it in jest and isn’t he entitled to his opinion.

Sorrentino, in his letter, described yoga pants as the worst thing in women’s fashion since the miniskirt. He argued that “yoga pants belong in the yoga studio and that women over age 20 shouldn’t wear them in public.” Youth has its advantages and looking better in clothes is one of them.

As for me, a big turn off is women with tattoo’s I don’t understand why a woman would want to mark up her body; I don’t understand why men do it either. I guess I’ll see a bunch of tattooed women marching outside my house soon. Like I said with everything going on around us this is what they go out of their way to protest about. I don’t get it, people get offended and get their feelings hurt by the stupidest things today, to them I say get a life. 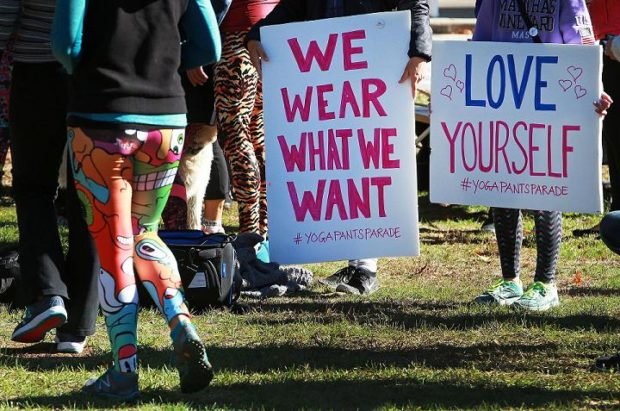 Support Conservative Daily News with a small donation via Paypal or credit card that will go towards supporting the news and commentary you've come to appreciate.
Tags
Women Yoga Pants