The Associated Press and New York Times fawned over the amazing body image question asked by a teenage girl at a Pennsylvania town hall yesterday. Hillary’s perfect answer was all the mainstream media could talk about – but it was all staged.

“Hi Madam Secretary.  I’m Brennan and I’m 15 years old.  At my school, body image is a really big issue for girls my age.  I see with my own eyes the damage Donald Trump does when he talks about women and how they look.  As the first female president how would you undo some of that damage and help girls understand that they’re so much more than just what they look like?”

The question gave Hillary the perfect opening to admonish Trump and make her look like the hero of females everywhere – unless they get sexually assaulted by her husband:

“I’m so proud of you for asking that question. You are right — my opponent has just taken this concern to a new level of difficulty and meanness.  And, it’s shocking when women are called names and judged solely on the basis of physical attributes.

“My opponent insulted Miss Universe. I mean, how do you get more acclaimed than that?  But, it wasn’t good enough. So we can’t take any of this seriously any more. We need to laugh at it. We need to refute it. We need to ignore it. And we need to stand up to it.”

The moment seemed so perfect, too perfect and as YouTuber known as Spanglevision felt that things just seemed too good to be true:

You see, Brennan is actually Brennan Leach, a professional actor who is also the daughter of Senator Daylin Leach (D-PA.) Shocked? Shocked you say? She had no choice but to stage this cute little moment. She is being hammered for her evil dealings with her husband’s sexual assault victims. She has to be the hero of women to be able to fake her bona fides as a feminist.  It took a YouTuber less than a day to research this little gem, but the New York Times and Associated Press couldn’t be bothered with all that real journalism crap. They instead put this 100% piece of propaganda out:

It’s not necessary to point out the abysmally small crowd at the town hall, but I will  anyway. 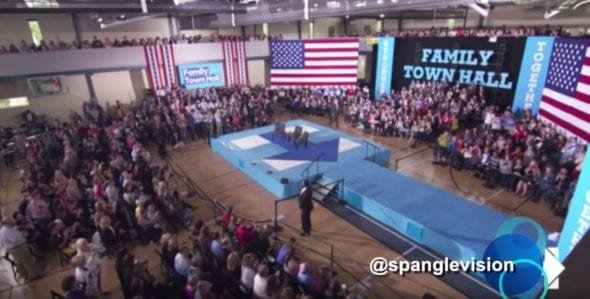