Compared with the second debate, the final encounter between Donald Trump and Hillary Clinton was mostly a snooze, but we did clear up one point of contention.

Now the American people know who to support if they want to complete the Latinization of the United States and install a tin–pot dictator in the White House just like South of the Border. 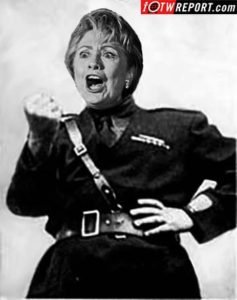 A vote for Hillary will be a two–fer: She’ll undermine the Constitution while changing the drapes.

Hillary’s answer to a question regarding her criteria for appointments to the Supreme Court cleared up everyone but the media’s confusion. A crucial question since the next president will fill one open seat and potentially two to three more as leftist hacks move on to the final venue.

In 416–words Hillary didn’t bother to mention the Constitution until the next–to–last sentence and even then it was an incorrect procedural reference to the confirmation process.

Instead of appointing judges who will defend the Constitution, her goal is to make the Supreme Court a mini–legislature where she determines the membership and the decisions.

Even worse, Hillary — like other tin–pot dictators — intends to tell judges how to rule BEFORE she appoints them. The Clintonista judiciary is to “stand on the side of the American people, not on the side of the powerful corporations and the wealthy. For me, that means that we need a Supreme Court that will stand up on behalf of women’s rights, on behalf of the rights of the LGBT community, [and] will stand up and say no to Citizens United.”

That’s not a litmus test — those are marching orders.

Hillary’s philosophy is a fundamental perversion that overturns a constitutional order dating from the founding and the rule of law itself.

The law is not to be a respecter of persons, or as Leviticus 19:15 instructs: “[Judges] shall do no injustice in judgment; you shall not be partial to the poor or defer to the great, but in righteousness shall you judge your neighbor.”

The role of the Supreme Court is to apply the law, in this case the Constitution, to the case at hand, regardless of the social standing or sexual preference of the individuals involved in the case. Lawsuits aren’t handicapped like horseraces. A judge doesn’t give a poor minority the benefit of the doubt; he gives him the benefit of the law.

Hillary’s whims will determine what is constitutional and what is not. Take her differing views of two court decisions. Roe v Wade re–wrote the Constitution to permit killing as long as the victim was under a certain age.

Citizens United held that money in campaigns was a form of speech and laws passed by Congress that banned this speech/money violated the 1st Amendment. At that the ban only applied to certain commercial enterprises. Corporate money was banned, but union money — just as commercial — was not banned, since that money helped elect Democrats.

Both decisions can theoretically be overturned by a future court, as long as it’s not a Clinton court. Hillary says Roe v. Wade “guarantees a constitutional right” to abortion, as if the wording is actually part of the document, while Citizens United is a decision “[judges] must stand up against.”

If you are interested in learning how Hillary’s philosophy of appointing judges whose first loyalty is to the left and not the Constitution works in practice just look at the situation in Venezuela. Bloomberg News reports strongman President Nicholas Maduro has used his appointed judiciary to block a citizen–generated recall vote guaranteed in the country’s constitution.

Maduro’s unilateral edicts and the political situation is eerily similar to ours: “Even after losing power in Congress 10 months ago, Maduro has managed to stifle constitutional attempts at removing him …In coordinated actions, courts in five pro­government states suspended signature collections on Thursday, prompting the national electoral council to halt the process nationwide.”

That ends any hope for a recall vote.

And don’t take comfort in the false assurance that we won’t be facing a recall situation here. Maduro uses his court for routine government, much like Hillary would like to if she gets the chance. Does this divide between the executive and legislative sound familiar? “The legislature and executive remain at loggerheads, paralyzing the democratic process. Maduro even approved his 2017 budget through the supreme court, bypassing legislators.”

A Hillary Clinton administration will be a continuation of eight years of Obama decline, only she will add to the Oval Office collection of office supplies.

Hillary will have a phone, a pen and a rubber stamp Supreme Court.

Support Conservative Daily News with a small donation via Paypal or credit card that will go towards supporting the news and commentary you've come to appreciate.
Tags
abortion Hillary Clinton Politics Pro life The Second Amendment The Supreme Court of the United States