The presidential election of 2016 presents a consequential conundrum for voters, especially conservatives. With antipathy running at historic highs for a Republican nominee, the temptation to vote third party or not at all is significant. While each must make his or her own decision about what matters most in the process, we have to bear in mind the consequences of our decision.

First, let’s dispense with what elections are and what they are not. Voting for candidates is a means of selecting representatives for our governance. The most pervasive definition is, “An election is a formal decision-making process by which a population chooses an individual to hold public office.” The U.S. is not a theocracy, so we aren’t voting for a pastor, or a spiritual leader, or a great moralist. 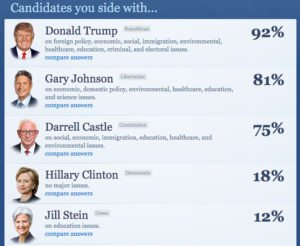 Candidates have platforms, or statements of belief to delineate their policy positions in order for voters to ascertain their intent if elected. Ideally, all candidates are decent, honest, and honorable. So what do we do when the two major candidates in a two-party system are not? The most logical approach is to remove the subjective elements and focus strictly on the objective, by comparing your beliefs with those of the candidates. A superb way of seeing how your convictions align with the candidates is on the Internet at www.isidewith.com. Take the quiz at the top of the page for the presidential election and see how your view on the role of government, and specific issues, aligns with the candidates.

Although several candidates, including those from the Libertarian, Constitution, and Green parties are included, and may be on most of the state ballots, ours is fundamentally a two-party system. Some of that is due to our political history as a nation, but according to a research piece by the University of California in 2004, the Electoral College is one of the principle reasons. With a multiple party system, the ability to achieve the requisite 270 electoral votes is greatly diminished, which would cause presidential elections to be decided by the House of Representatives, rather than the popular vote by state, selecting Electors.

One Independent candidate has a strategy to take just one state, which his supporters argue, could possibly prevent either of the major candidates from surpassing the 270 electoral requirement. As it stands now, with the states Hillary Clinton has solid leads in, she has a 262 to 154 Electoral vote lead. Realistically, this isn’t even close, since all Hillary has to pick up is a state or two among the nine toss-up states, while Trump has to pick up all of them to win. 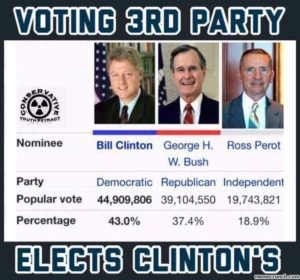 Because of the strength of the two-party system, third-party candidates inevitably draw voters from one of the two major parties. The Green Party takes some liberals from the Democrats, and the Constitution Party draws from the Republicans. While the Libertarian Party draws some from both, in part due to the social policies including legalization of drugs, but mostly from the ranks of the GOP. With the high level of dissatisfaction with the GOP nominee this year, the more votes siphoned away from one party or the other may have an impact on who ultimately wins, just as in 1992. That year Ross Perot, an Independent, amassed nearly 20 million votes, but didn’t win a single state or any Electoral votes. George H.W. Bush lost to Bill Clinton by only five million votes, but it was an Electoral landslide for Clinton with 370 to 168 Electoral votes. The Independent candidate handed the victory to Clinton, having funneled off enough Republican voters to deny Bush the reelection.

Many voters are caught up in the “lesser of two evils” debate, averring they could never choose to support a candidate who is perceived to be only slightly less “evil” than the other. From a logical perspective, this approach to voting is fundamentally flawed, for it’s based on the premise that there is, in the political space, the opposite of evil – a perfect candidate. There are no perfect candidates. We’re all mortal, hence fallible and imperfect. Thus, technically, every election is a choice between “evils.” And since we’re dealing with mortal institutions, every choice is a gradation of imperfection and fallibility. 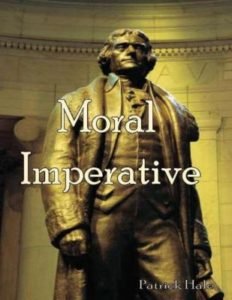 So given that all candidates are mortal, and therefore flawed, or if you will, “evil,” to some degree or another, we’re always voting for the lesser of evils. Let’s approach this concept from a logical and philosophical perspective based on Immanuel Kant’s deontological ethics, or duty-based ethics. From a Kantian “moral imperative” standpoint, to in any way facilitate the victory of the greater evil, is contrary to our duty to the republic. So if one acknowledges that one of the major candidates is more “evil” than the other, to allow the greater evil victory, by siphoning away votes from the lesser evil, is in fact immoral.
The bottom line is, why do you vote for a candidate? Do you vote for someone you believe honest, but whose convictions are antithetical to your own, or do you vote for the one who aligns closest to your convictions and preferred policies, perhaps in spite of perceived personal flaws? If politics was an ecclesiastical exercise, and you were selecting a new pastor, perhaps the former makes most sense. Ideally, all of our candidates would be honest and without character flaws. But as mortals, imperfection is a given, perhaps especially in the realm of politics. And since politics is about governance, and policy follows principle, ideological alignment is a more fundamental and realistic basis from which to choose.

Before the pro-liberty voter commits to a third party, they must consider the implications if they enable a Clinton victory. A few key issues to consider: 1. More Ginsburgs and Sotomayor’s on the Supreme Court, or more Scalia’s and Alito’s? 2. Less regulation versus more regulation. 3. More free enterprise or less? 4. More U.S. sovereignty (and concomitant security) or less, by ceding authority to the UN. 5. A stronger military or a weaker, more diluted and socially engineered one? 6. More wealth redistribution, or more personal accountability and freedom to achieve? 7. Keep Obamacare, or repeal it? 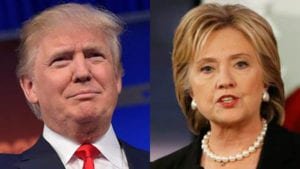 The reality is that either Clinton or Trump will win. Sometimes we have to step outside of our comfort zone and vote based on policy and the greater good, rather than on a person, or assuaging our intrinsic sense of propriety. This is especially true for those who live in swing states where the election outcome will be determined.

Abstinence from voting, or voting in such a way to facilitate the election of the “greater evil,” certainly would be a violation of the moral imperative. We’d best consider the consequences of that third-party vote, or not voting, because if Clinton is handed the victory, the political hangover the morning after the election is going to be a doozey!