Hillary Clinton has put a new jet on the campaign trail and will now be travelling with the press.

The new campaign plane will allow the Democrat candidate travel with the press that covers her. This should allow more access to the reclusive candidate, but does not substitute for the lack of a press conference for more than 275 days.

Hillary’s new plane is a brand new Boeing 737-800 being leased from Xtra Airways and Air Partner. The aircraft can carry 180 people and make a cross-country flight without refueling.

The 737 is adorned with the iconic Hillary logo and the ‘Stronger Together’ campaign slogan.

The new jet changes how Clinton and the media travelled. Previously, the press travelled in a separate aircraft ahead of Hillary’s private charter. 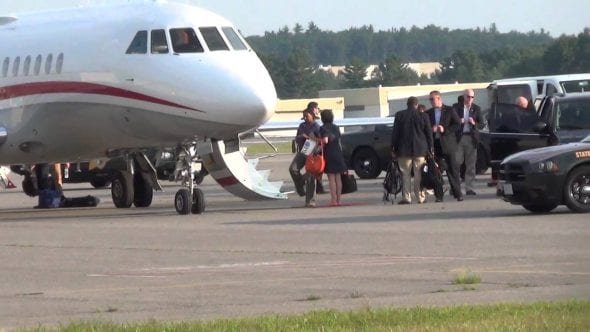 On the plane’s inaugural flight on Monday, Clinton spoke briefly to the members of the press:

‘I am so happy to have all of you with me’

Hardly a deep question and answer session, so we’ll have to see how the new transport effects her lack of accessibility to the press.