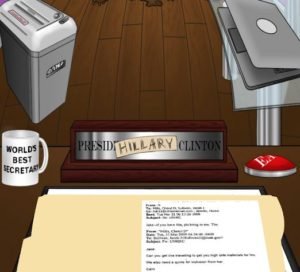 Live the simulated life of a top government official in this mobile app by Ansem Omega Solution.

“Hide it Hillary” puts the player in the shoes of a senior staff member tasked with putting official documents in their “proper” places.

The feds are on to Hillary and it’s time for you to help hide her tracks. Sift through her countless emails and “Reorganize” them by tapping the appropriate receptacle. Be warned, this time we have to do this clean and not accidentally end up with secret stuff in the not so secret laptop. Build your “Warchest” with donations by properly filtering documents or end up in the slammer for not being shady enough.

Google accepted the app in less than a day and it’s currently available on Google Play HERE and on the Apple App Store? Nope.

Apple banned the game from the app store saying that the app “includes content that could be considered defamatory or mean-spirited.”

It would appear that Apple has declared its app store a safe space for 2016 presidential candidates …  except for those satirical apps that might be considered mean-spirited towards Trump.

Here are the anti-Trump apps that had no trouble making it to the tech giant’s store:

Apple is a private company and has never been considered a member of the media so it is well within its rights to decide what should or should not be placed in its stores. Applying a policy unfairly is just a weak, underhanded way to accomplish that.

If they don’t want satirical Hillary Clinton apps on the their devices, they should just say that – but they won’t.