Donald Trump’s desire to become the President of the United States is in serious trouble after a terrible week.

Going into the made-up stories from the left about Melania’s working under the wrong visa (debunked), Trump getting baited into talking about a Clinton-supporting, immigration law ensnarled, questionable character guy and the baby incident is not what I’m going to dive into. This is about pure numbers and on that basis, Trump is in trouble.

Polls don’t matter. They are often wrong and focus on incorrect populations. This is about the electoral college and how Trump has failed to change it AT ALL from 2012.

In 2012, Romney got shellacked by an unpopular, failed and otherwise inept incumbent. Why? Well, first he was a terrible candidate with no testicular fortitude. Mostly though, it was the math: 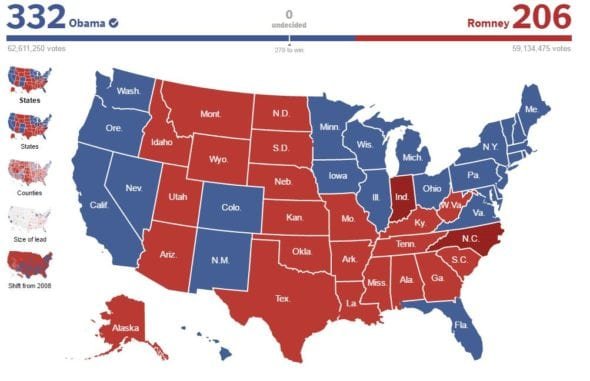 For 2016, Trump needs to gain Florida, Virginia and Ohio while not losing North Carolina – all of which look impossible with recent events. Current non-polling-focused analysis says that this is the map for 2016 and it looks like a heavy win for for the evil queen: 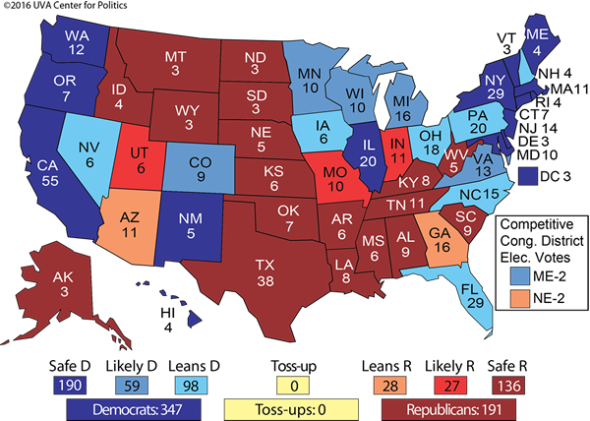 So how does the Donald pull it off? Here’s the only way I see Trump pulling out an electoral win: Trump will have to stop attacking useless targets and stay on-message about illegal southern-border immigration so he can regain New Mexico and hold on to Arizona.

Florida will be a challenge due to Trump’s immigration stance being unpopular with immigrants and the Sunshine state’s heavy hispanic population.

Colorado is going blue .. the pot vote will see to that.

Virginia will likely go solidly blue due to Tim Kaine’s presence on the corruption ticket. He is owned by Wall Street, but beloved by Virginians.

Pennsylvania, Ohio and Indiana are must-haves for the Trump effort if Donald wants to win the White House.

Kasich being a selfish moron may hand Ohio to Hillary which is all she would need to win. Ohio’s governor could be personally responsible for the supreme court changes that lead to the largest change in individual rights in American history.

This election isn’t about Donald Trump or Hillary Clinton, it is about the vacated seat of the recently deceased Justice Antonin Scalia. Scalia was an originalist on the constitution. If he gets replaced by a more interpretationist justice, the amendments in the bill of rights will soon mean very different things to the highest court in the land.

Don’t vote for Trump, consider his originalist/constitutionalist picks for the supreme court. We can vote him out in a few years if he turns out to be awful. A supreme court justice is a lifetime appointment with severe consequences on our individual rights.

Support Conservative Daily News with a small donation via Paypal or credit card that will go towards supporting the news and commentary you've come to appreciate.
Tags
2016 Election News 2016 Presidential Election Politics