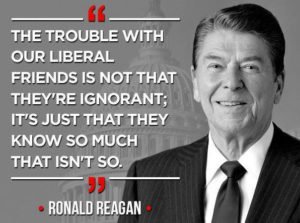 Ronald Reagan once memorably stated, “The trouble with our Liberal friends is not that they’re ignorant; it’s just that they know so much that isn’t so.” Seldom do we get such a grand stage to prove the veracity of his statement, as we did at the Democrat Convention last week. Here are just a few of the numerous examples that were liberally uttered during their confab.

Cecile Richards, CEO of Planned Parenthood said on the first day of the convention, “Planned Parenthood was founded 100 years ago, giving women the care they need to live their lives and chase their dreams — no limits, no ceilings.” Apparently she’s forgotten that PP founder, eugenicist Margaret Sanger, held the conviction that blacks and minorities should be “weeded out” from the populace. That sounds like a pretty significant “limit” and “ceiling,” to me!

Michelle Obama said, “We explain [to our girls] when someone is cruel or acts like a bully, you don’t stoop to that level. No. Our motto is: When they go low, we go high.” Apparently the First Lady is unfamiliar with how Barry has bullied his progressive agenda onto the nation, bypassing congress, which has the only authority to create laws. As the president has said, “I have a pen and a phone,” and he presumed that gave him all the authority necessary for him to create new law by simply and dictatorially declaring it. There has never been a bigger bully in the Oval Office. 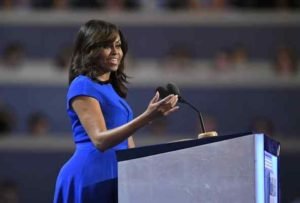 She also said, “Don’t let anyone ever tell you that this country isn’t great — that somehow we need to make it great again. Because this, right now, is the greatest country on earth.” Hmm. I seem to recall her saying in 2008, “For the first time in my adult lifetime I’m really proud of my country.” She must not have thought it was too great then. Oh, maybe that’s because her husband hadn’t yet completed his “fundamental transformation” of America. Now that the government has eviscerated so many of our individual rights, and so many socialistic programs imposed on the populace, maybe it’s now great to her.

Senator Elizabeth Warren declared, “Look around. Americans bust their tails, some working two or three jobs, but wages stay flat. Meanwhile, the basic costs of making it from month to month keep going up. Housing, health care, child care — costs are out of sight. Young people are getting crushed by student loans. Working people are in debt. Seniors can’t stretch a Social Security check to cover the basics. And even families who are OK today worry that it could all fall apart tomorrow. This. Is. Not. Right!” Well what do you expect, Senator? Those are the predictable results of seven years of Obama Administration policies. Since Hillary would be the heir apparent to perpetuate those destructive policies, the Senator has unwittingly provided the very evidence why Clinton should not be elected! 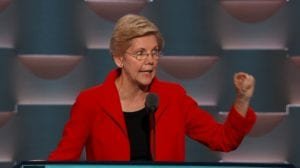 Warren also said, “People get it: the system is rigged.” That couldn’t be more true for Bernie Sanders supporters, who saw the DNC rig the system to ensure Hillary’s coronation. And perhaps not coincidentally, the economy is now “rigged” against the middle class, as they shoulder the immense costs associated with the redistributive policies of Obama, and the increased costs of onerous regulations imposed on small business over the past seven years. Yes, it is rigged. And Obama, Clinton, et al did most of the rigging!

Erstwhile presidential candidate Bernie Sanders said, “Together, my friends, we have begun a political revolution to transform America, and that revolution — our revolution — continues.” One can only wonder if he didn’t get Michelle Obama’s memo that America is already great. And if perpetuation of that “revolution” means more of what the past seven years has dumped on the nation, heaven help us if his revolution is not yet over! The middle class can’t take much more of his idea of “transforming America.”

Khizr Khan, a Gold-Star Father and an immigration attorney specializing in Muslim immigrants, said, “Donald Trump, you are asking Americans to trust you with our future. Let me ask you: Have you even read the U.S. Constitution? I will gladly lend you my copy. In this document, look for the words ‘liberty’ and ‘equal protection of law.’” Well, apparently Khizr Khan hasn’t read the Constitution himself. The word liberty only appears in the preface explaining the purpose of the document, and “equal protection of law” is nowhere to be found. Granted, the 14th Amendment assures “equal protection under the law” for citizens, but not for those whom Khan was promoting. Further, when he said Trump’s proposal to limit Islamic immigrants was “unconstitutional,” he obviously didn’t know about the Immigration and Nationality Act of 1952 which allows the president to “bar migration of any alien or class of aliens the president sees as a threat to the United States for any reason at any time.”

Former Attorney General Eric Holder said on day two, “As the brother of a retired police officer, I am profoundly aware that an attack on a police officer anywhere is an attack on our entire society. So it is not enough for us to praise law enforcement after cops are killed. We must protect them, value them…” Holder has arguably been at the helm of the nationwide war on policemen. Milwaukee Sheriff David Clarke has said of Holder, that he is “the most race-obsessed attorney general in the history of the United States… Everything he does is put through the racial lens. He’s had Ferguson, Missouri and its police department in his crosshairs ever since he went down there with that tragic situation with Mike Brown.” He and his boss are most culpable for the threats to our law enforcement officers resulting from the Black Lives Matter movement.

Former Senator and presidential candidate Howard Dean declared, “We need a president who will defend our interests around the world — not with ignorant bluster and bombast, but with toughness and resolve.” He’s exactly right! Obama certainly hasn’t done that, even with Clinton at his side. Electing the one most responsible for the chaos in Libya, abandoning Americans there to die, and then lying about it, hardly fits the bill!

And finally, from outgoing President Barack Obama, “While this nation has been tested by war and recession and all manner of challenges — I stand before you again tonight, after almost two terms as your president, to tell you I am even more optimistic about the future of America. How could I not be after all we’ve achieved together?” According to the most recent NBC/Wall Street Journal poll, 73% of registered voters say the country is on the wrong track, while just 18% said it is headed in the right direction. I’m not sure he has any ground to brag from. And Hillary represents just more of the same.

And then on the final night it was the candidate herself. In one paragraph in her speech, she lamented the horrible condition of the economy, and yet claimed Obama and Biden didn’t get enough credit for it.

It’s little wonder that a party whose core principles move ever farther from the republic’s foundational values, would display such detachment from reality. These observations should be universally acknowledged, yet inexplicably they get lost in the spin of the media and partisan myopia. If indeed 73% of registered voters believe the nation is headed in the wrong direction, the last thing we should do is to add another four years to the Obama legacy of economic malaise, regulatory overreach, redistributive policies, and foreign policy ineptitude.

Support Conservative Daily News with a small donation via Paypal or credit card that will go towards supporting the news and commentary you've come to appreciate.
Tags
2016 Election News Presidential Election 2016