Anyone who has distaste for the influence that money buys in politics, should be repulsed by the monetary albatross that follows Hillary Clinton wherever she goes. The albatross is none other than the “charity” of her own making, The Clinton Foundation. Even Hillary supporters now are acknowledging the inherent corruption her family slush fund is facilitating, and calling for its dismantling prior to her assumed election as president. After all, if foreign states and special interests were using the fund for “pay to play” while she was Secretary of State, the stakes, and the potential payoffs, would be much greater with a future president. 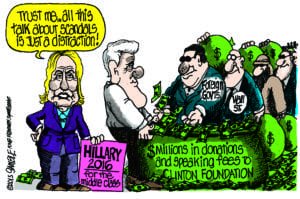 According to Hillary Clinton last year, the First Family of the 1990’s left the White House “dead broke,” in 2001. They made up for their White House poverty years from 2001-2006, when, according to Mrs. Clinton’s Senate disclosures, the couple made $87.3 million, from book deals and speaking fees. As long as none of those paydays bought influence, that’s just fine, unless of course one’s ideology, like Bernie Sanders supporters, requires disdain and class-envy of those who are financially successful, for the Clinton’s are clearly “one per centers.”

The Clinton’s financial waters are considerably murkier when their Foundation is brought into the picture. The Clinton Foundation is classified under IRS Code 501(c)(3) as a “non-profit” foundation, comprising several separate “initiatives,” or areas of focus, including health, economic opportunity, and climate issues. In just over 13 years, the Foundation has raised nearly $2 billion from U.S. corporations, especially Wall Street firms, political donors, and foreign governments. 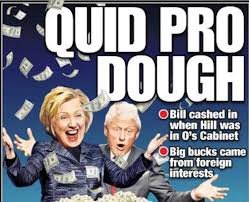 The nebulous financial arrangement and political nature of the Foundation was of sufficient concern to the Obama administration that Mrs. Clinton was required to sign a disclosure agreement with the White House before her nomination as Secretary of State in 2009. According to the Washington Post, Obama required her “to disclose all contributions to the Clinton Foundation, and that there be a process to vet donations that were coming in. They violated that agreement almost immediately. They took multi-million dollar donations from foreign governments and businesses that had interests before the State Department. Those were never disclosed.”

But even that raises significant issues, since according to the Foundation’s own tax filings, only 13% of their donations ultimately make it to “charitable grants” for their professed causes. That’s a whole lot of donations that go for expenses, salaries and benefits, travel, office supplies, rent and payouts to the Clintons themselves. And of course there’s the 2% that goes to IT (information technology), for that’s where all of Hillary’s emails were stored, in two separate email accounts, until they were mostly erased, in violation of federal record-keeping laws.

That’s likely where much of the hard evidence alleged in Peter Schweitzer’s book, “Clinton Cash,” would have been found. Absent the hard evidence, most of the public evidence is circumstantial. Charges that official State Department policy toward countries like Libya, Saudi Arabia, and India, were altered or softened after contributions by those countries to the Foundation certainly raise serious questions of paying for influence.

The most serious, however, is well documented. As explained by the New York Times, a Canadian businessman was purchasing up to 1/5 of the U.S. uranium assets. The Canadian firm, Uranium One, was then sold to Russia’s atomic energy agency, Rosatom, which was celebrated in Russia’s Pravda with the headline, “Russian Nuclear Energy Conquers the World.” An acquisition of this size and nature had to be approved by the U.S. State Department, which was easily done with Mrs. Clinton at the helm. And it just so happens, that at the very time, the same firm made a $2.35 million donation to the Clinton Foundation. At least we know the price to buy off the Secretary. Wonder how much it will be as President? 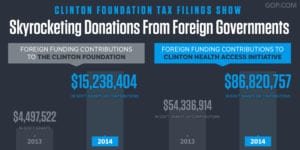 To make this even more salacious, a Kremlin-linked bank that was promoting the stock of Uranium One, paid Bill Clinton $500,000 for a speaking engagement. But the contribution went not to the former president, but to the Clinton Foundation, as many of the speaking fees are funneled for non-taxable reporting purposes.

Even the Boston Globe, a Clinton-friendly paper, said in an editorial this week, that the foundation is, “clearly a liability for Hillary Clinton,” and that, “The inherent conflict of interest was obvious when Hillary Clinton became secretary of state in 2009.” They recommended that it be disbanded altogether. “The foundation should remove a political—and actual—distraction and stop accepting funding. If Clinton is elected, the foundation should be shut down.” One must wonder why it’s acceptable to “pay to play” as Secretary of State but not as President.

According to The Daily Caller this week, three separate FBI field offices have gathered enough evidence to bring corruption charges against the Foundation. So far, the Justice Department has rebuffed those requests, likely for the same political reasons that kept Clinton out of jail for her cavalier handling of national security communiqués. 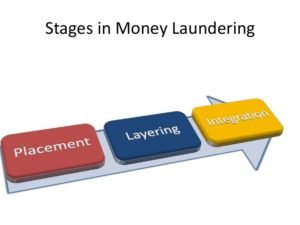 The Clinton Foundation meets all of the criteria for a money-laundering entity: placement, layering, and integration, while enjoying the benefit of tax-exemption. They collect millions in donations (placement). Then through layering (or structuring) distance is created between the donation and the source, to obscure the audit trail. And finally the integration stage, which in the Foundation’s case, is the returning of favors and influence to donors. Classic “pay to play.”

Operationally, the Clinton Foundation functions as a shell corporation for the Clintons, and the pass-through conduit for buying influence and tax avoidance. Thanks to the IT staff at the Foundation, and Hillary’s obfuscation, we may never fully grasp the breadth and reach of the corruption. No wonder only 11% of us, according to the latest poll, believe Hillary is honest.

Support Conservative Daily News with a small donation via Paypal or credit card that will go towards supporting the news and commentary you've come to appreciate.
Tags
2016 Election News 2016 Presidential Election Politics The Clinton foundation