I am not a fan of the government forcing its people to do anything, which is one of the big reasons I have been against Obama-care. The thought that the government can force you to buy a product or get fined angers me to this day.

Now I find another thing to anger me. A private school in New York City, which serves grades K-8 has pushed the envelope way over the line. The Bank Street School in upper Manhattan has a diversity director named Anshu Wahi (That name is the first alarm)           who teaches white students as young as 6 that they’re born racist and benefit from “white privilege.” She argued it’s a “brave step” that teachers, parents and students must all take to be more “progressive” in their thinking about race.

What kind of a brain thinks that it is constructive telling a 6 year old that they are bad people just because they were born white? Oh, that’s right, the Liberal Progressive mind. The stupidity of the Liberal Progressive mind is beyond words. Many parents have complained that their kids have come home in tears, saying, “I’m a bad person,” if that was my child I would have done a lot more than complain.

That thinking indoctrinates white children into believing “systemic racism” still exists and that they’re part of the problem and must hold themselves accountable even for acts of racism committed by others. Those poor kids, starting them off in life with a guilt complex is not gonna do anyone any good. Why anyone would feel guilty for something they had no part in is beyond me. As a matter I wrote an article a while back titled “White Guilt, Not For This White Guy.”

If every white person is responsible for their race, then every black person is responsible for their race and believe me blacks wouldn’t want that. “One hundred percent of the curriculum is what whites have done to other races,” one parent said. For every one thing that whites have done bad, there are one hundred things they can be proud of. Why don’t they teach these kids what they need in life, like reading, writing, arithmetic, science, history and how about throwing in patriotism, something that is severely lacking in today’s society? Oh, I forgot, it’s because of the Liberal Progressive mind.

There was one bright spot to this story, the diversity director Anshu Wahi will not be returning next season, I guess enough parents complained, thank God for right minded thinkers. Below are the goals the school set for the children. Black goals on the left, white goals on the right. 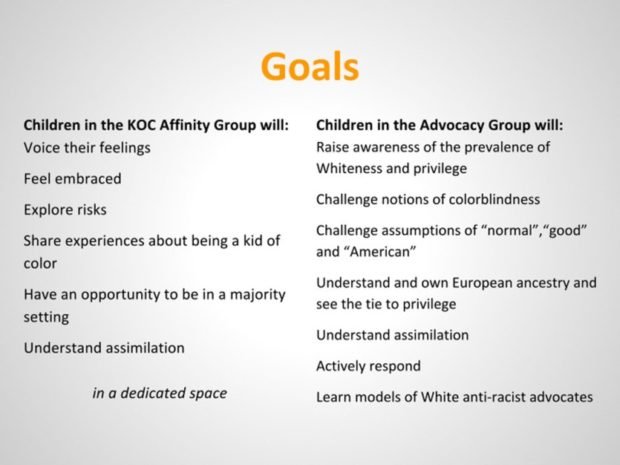