It takes a special kind of president to travel to Dallas, ostensibly to speak at a memorial service for five assassinated police officers, and instead deliver a Black Lives Matter convention speech. A president completely oblivious to the purpose of the occasion and what decency requires.

Obama delivered a speech the Daily Caller said was almost entirely his composition, so sympathizers can’t go to the default excuse and blame it on the staff. 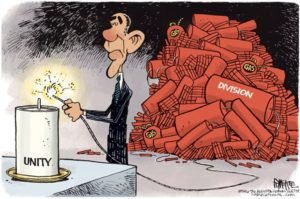 This was Obama letting Obama be Obama.

Less than half the speech can generously be attributed to honoring the officers who gave their lives.

The rest was an insulting travesty that combined Obama’s usual self–referential adulation (45 mentions of “I”) with his faculty lounge race–baiting and hectoring of a society that after almost eight years still doesn’t deserve him.

It was a slap in the face to every member of the Dallas police family when Obama made excuses for Black Lives Matter and included sympathetic references to Alton Sterling who was shot resisting arrest in Baton Rouge: “And I understand these protests — I see them…Sometimes they can be hijacked by an irresponsible few. Police can get hurt. Protesters can get hurt.

“…But even those who dislike the phrase “black lives matter,” surely, we should be able to hear the pain of Alton Sterling’s family.” Maybe later, but certainly not at the Dallas service.

There is no sentimental equivalence between the deaths of five police officers killed while protecting people expressing their dislike of cops and the death of a career criminal.

Obama justifies this bizarre show of mortuary equivalence by explaining that in addition to his criminal career, Alton was the black male answer to Paula Dean, “We should — when we hear a friend describe him by saying that, whatever he cooked, he cooked enough for everybody, that should sound familiar to us, that maybe he wasn’t so different than us. So that we can, yes, insist that his life matters.”

Yes, nothing says loving like something from the oven. If only Sterling expressed an equal love for the law.

Dallas cops gave their lives trying to keep the peace, Sterling lost his life running a low–class hustle where he sold pirated CDs and DVDs to a customer base that has as much respect for intellectual property as China.

Examined in the light of his overall criminal career, Sterling’s activities that night were almost benign, except for brandishing the gun at the person who called 9–1–1. The individual Obama eulogized on the Dallas stage was a convicted pedophile, domestic abuser, burglar and thief with previous gun convictions.

That’s enough to get you banned from the NFL, but if a cop shoots Sterling as he reaches for the illegal gun in his pocket, it rates a shout out from the president.

Hands down, I want to shoot!

The speech would’ve been a perfect time for Obama to point out it’s not only whites who fall prey to racial bigotry and that the nation as a whole would be better served if we resisted the urge to jump to conclusions before all the facts where known. And to give some credit, he did say painting all cops as criminals, serving a corrupt justice system, was wrong.

And then Obama turns around and gives Black Lives Matter, the group doing just that, absolution for the climate of cop hatred it created!

“We also know that centuries of racial discrimination, of slavery, and subjugation, and Jim Crow; they didn’t simply vanish with the law against segregation…So that if you’re black, you’re more likely to be pulled over or searched or arrested; more likely to get longer sentences; more likely to get the death penalty for the same crime…we cannot simply turn away and dismiss those in peaceful protest as troublemakers or paranoid.

“…To have your experience denied like that, dismissed by those in authority, dismissed perhaps even by your white friends and coworkers and fellow church members, again and again and again, it hurts. Surely we can see that, all of us.”

So maybe these Dallas cops were innocent, but keep an eye on the rest of those crackers.

During an occasion that called for truth Obama endorsed a racial shakedown movement based on the lie that Michael Brown was shot down in cold blood while on his way deliver cigars to orphans.

It was a travesty. It was offensive. And it was a disservice to the families of the slain police officers.

Black lies matter, Mr. President. If you don’t believe it, call the chief in Dallas.