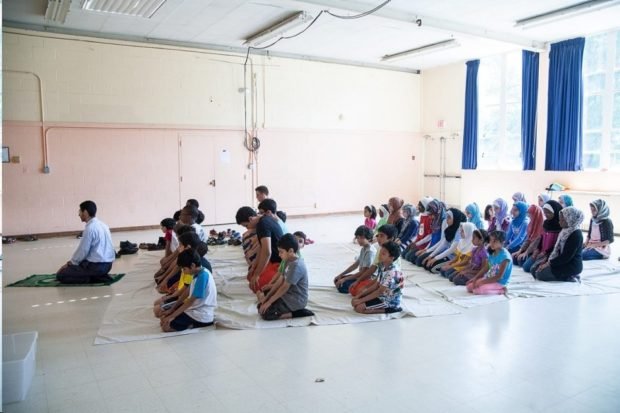 I recently read an article about these 35 Muslim camps located  throughout the United States that are aimed at making Muslim kids feel good about themselves and who they are which sounds innocent enough. The article was saying that Islam is no different than the protestant, catholic and Jewish religions.  Camp Ramadan is a week-long arts and crafts based summer camp for Muslim youth in and around the Washington D.C. area, that correlates with the end of the Islamic holy month. According to Breitbart News, the camp’s director Iranian-American Mona Eldadah, claims the summer camp is a place where Islamic youth can fast together while also doing other activities.

For observant Muslim families in the United States, the holy month of Ramadan — which ran from June 28 to July 27 this year and will continue to fall during the summer months through 2016 — can be a balancing act between honoring religious traditions, including sunrise-to-sunset fasting beginning when kids are preteens, and letting children take part in quintessentially American activities like summer camp.

Held for the second time this year, the camp mostly eschews religious practice, except for brief midday prayers. Instead, the emphasis is on traditional Islamic arts and crafts that are not commonly taught in America — including paper marbling, marquetry (wood inlay) and decorative bookbinding — as well as on personal development through community service and leadership workshops.

Although there are other Ramadan camps in the United States, most either focus narrowly on Quranic study and religious teaching or, at the other end of the spectrum, offer fairly typical American summer camp activities (albeit without serving food). Unconventional Ramadan Camp Draws Dc-area Kids | Al Jazeera America

This is all well and good and like a typical American summer camp for kids, but upon further reading of the article I wondered if the kids were being brainwashed either by the media and their families about current events, particularly our upcoming election. Here is an example:

“As a leader, who do you wish to serve?” a child, playing the role of debate interviewer, asked the boy’s character — a certain political candidate with the alias of Ronald McDonald.

“I wish to serve my very fantastic self,” answered Amir-Abbas, 11, provoking peals of laughter from the parents. Money, he told the interviewer, is the key to great leadership  and he had lots of it.“I’m trying to make America great again by kicking out Mexicans, Muslims and African Americans,” he added.“By the way,” he said, sweeping a hand over his dark, cropped hair. “This hair is real.”

First of all this kid is wrong on all the issues about Trump and he thinks he is right even if he was being satirical.  I wonder where he got this misinformation from ?   The media  or his parents or fellow Muslims?  Trump does not want to kick out all Muslims, Mexicans and African Americans and has said so millions of times. He said he wants to deport illegals and have them come in legally which is as it should be. He doesn’t want to kick out Muslims, but put a temporary halt on Muslim immigration until we can figure out what is going on since we’ve had numerous attacks and numerous innocent Americans  all killed by Muslims since 9/11.  Lastly the  kid made fun of Trump’s hair as if it isn’t real. Trump’s hair is real he just combs it forward. This is a result of all the misinformation out there mainly from the biased left wing media. At Camp Ramadan, U.S. Muslims Learn to Mock Donald Trump

The very skit making fun of Trump (above) as someone who is going to get rid of people is indoctrinating the kids to hate Trump and feel like victims.
Teaching Muslims to be more Muslim instead of integrating to the new society they are entering is typical of Islam. They will not integrate and they eventually insist on Sharia law over the laws of the country. This is invasion. America needs to secure the borders and stop the influx of immigrants. We have enough for several decades. Taking a break and insisting people assimilate or leave is the only thing that will allow us our rights to protect American culture and freedom.

One camp, Camp Ramadan in  Washington  D.C., has reached its largest number of campers to date at 101, and has acquired the reputation as a place where D.C.-area Muslim kids can learn about and practice a core Muslim tradition, while making friends, creating art and talking freely about current affairs — like Trump.

Fasting during the daytime hours of Ramadan is one of the core religious obligations of observant Muslims, and is meant to foster a greater connection to God. The practice typically starts around puberty. For many preteens and teens, it serves as an informal rite of passage into Muslim adulthood around the same time that Jewish kids are having bar or bat mitzvahs and some Christian kids are receiving their first Communion. 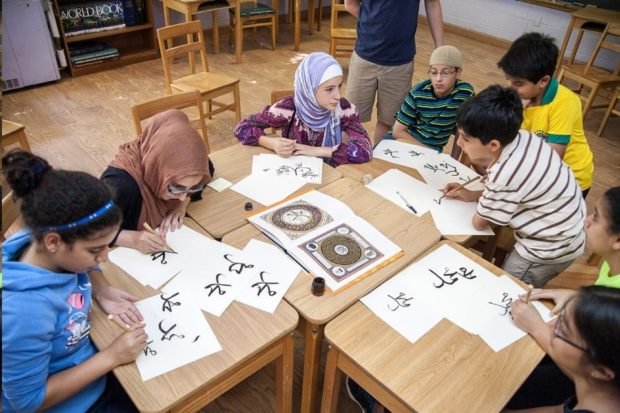 Are they proud of their history of attacking and killing those who are not Muslim? Are they proud of a “religion” that teaches killing of apostates, Jews, infidels & those that disrespect  their prophet?
I bet they won’t hear the true side of how Islam was formed. Muhammad  was a 7th century warlord who savagely conquered  tribes of people and killed them and subjugated them. He started Islam as a way of keeping those he conquered enslaved.  Islam means “To submit.”   Islam  is unlike any other religion, in that it preaches forced conversion, and killing of those who won’t submit if one follows the Quran as originally intended and written. While Americans have a right to believe as they wish, but like in any religion they should be aware of what they are worshipping.. Ultimately, the Muslim religion requires the destruction of all that is non Muslim. Allah was a moon god in mythology Muhammad used when he started Islam. That’s why Allah is the One God and Muhammad is the messenger. Islam’s God: The Origin of Allah the Moon God – Free Republic

I’ve said many times that Sharia and Constitutional law are incompatible with western civilization.  With all these refugees coming in here will we end up with Islamists demanding  we all convert to Islam when they feel their numbers are sufficient?  When Muslims are in the minority they are good neighbors and friends. When they get to 50% they start making demands like certain foods in restaurants and stores, demanding they have certain prayer hours on their job and that students be excused from class to pray which is happening now. When they get in the majority they demand they take over.

So are these camps just innocent summer camps for kids like we have now or are they subtle indoctrination centers for a future Muslim world. Muslim camps are spreading in the U.S. to help kids ‘be proud of who they are’