FBI Director James Comey’s news conference on the conclusion of the Hillary Clinton investigation reminded me of another staged media event in a hostile environment almost 50 years ago. During the Vietnam War Commander Jeremiah Denton had been shot down on a bombing raid and was being held in a Hanoi prison camp.

In May 1967 Denton was marched out by his captors to face a battery of television cameras. The goal of the propaganda event was to “prove” to gullible leftist journalists that the prisoners were well–treated in Hanoi. 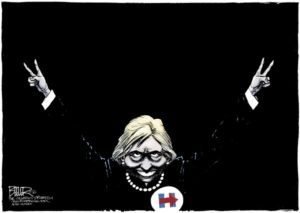 During his forced testimony Denton fooled his captors by blinking out the Morse code letters that spelled TORTURE. This was the first proof the Pentagon had that POWs were being tortured.

Denton paid the price for his courage by suffering more beatings.

In some ways the stakes at Comey’s event were as momentous as those at Denton’s: Potential duress, hostile leftist environment, psychological pressure and anxiety about his future. And although the final conclusion let Hillary off the hook, for a while it looked as if Comey was trying undermine the general tone of exoneration by using facts to contradict her lies and the administration’s pre–determined outcome for the investigation.

(For those of you who don’t believe it was pre–determined, note the timing: Comey recommends no indictment on the same day Obama travels with Hillary to Charlotte for a public endorsement.)

Comey’s stated the felony portion of the investigation was to determine if classified information was mishandled “either intentionally or in a grossly negligent way.”

He then methodically proved Clinton had been lying to the American public for months, which is not usually the script for a government whitewash.

Just offhand it seems to me we have obstruction and conspiracy, in addition to the other offenses. Comey then, as if waking from a trance, returned to the official line that there was no intent to violate the law, just “extreme carelessness.”

So how does one distinguish between the earlier “gross negligence” and “extreme carelessness”?

Easy, with the same set of facts if you’re just another government employee it’s “gross negligence,” but if you’re the Democrat presidential nominee, it’s “extreme carelessness.”

Anyone whose ever gotten a speeding ticket for unknowingly going faster than allowed knows ignorance of the law is no excuse, unless you’re a Clinton. Comey knows this and maybe it bothered his conscience, briefly, hence the damning details.

But he recovers fast. The conclusion he delivered exonerated Hillary in this instance and confirmed that henceforth under Democrat rule we will have a two–tier system of justice. One for Hillary and administration favorites and another for us little folks. That’s why NBC’s David Gregory can violate DC gun laws and face no consequences and Katie Couric can violate federal gun laws and not even get a call from ATF.

While David Daleiden who went undercover to videotape the damning Planned Parenthood organ selling scandal is now the one under indictment.

Even Comey recognizes that now the law “defers to the great” as he sheepishly explains, “this is not to suggest that in similar circumstances, a person who engaged in this activity would face no consequences.”

Maybe Comey thought pointing out the lies and laying out the evidence was enough to absolve him of blame for this travesty. But it most certainly was not.

When faced with a career–defining test Jeremiah Denton did all he could do, I’m not sure Comey did the minimum he could do.

Support Conservative Daily News with a small donation via Paypal or credit card that will go towards supporting the news and commentary you've come to appreciate.
Tags
Hillary Clinton James Comey The U.S. Department of State