A handful of activists using “civil rights” as justification convince leftist reporters and publicity–hungry Democrats to support a cause that until recently was not a concern to anyone who didn’t subscribe to Mother Jones magazine.

Carrying enough victim cards to fill a six–deck Blackjack shoe, they approach an unelected regulatory body and convinced the commissars to overturn the Constitution and rule in the grievance–monger’s favor. 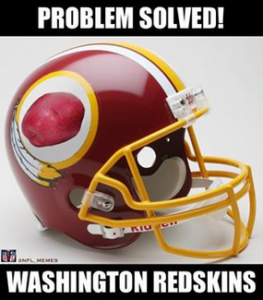 Threatening letters are sent from Washington. TV hairdos join the bandwagon. Halftime bloviators lecture America on the error of our ways.

And just like that victory is at hand; you can use any bathroom that has a vacancy — as long as you aren’t wearing a Washington Redskins’ team jacket.

At least that was the plan, until the opposition refused to show up and smoke the peace pipe.

Unfortunately for America’s politically correct elite, it appears Indians don’t know what’s good for them. The anti–Redskins name boomlet turned out to be a lot like that tree in the forest, the one that fell, but no one heard.

For more than a decade Dan Snyder has been saying the vast majority of American Indians were not offended by the name “Redskins”, basing his contention on a 2004 survey taken by the Annenberg Public Policy Center.

That wasn’t good enough for the cultural seismograph operators demanding the Great White Father make Snyder change the name. Their hardy war band tried protesting outside the ‘Skins home games, but soon learned football fans weren’t as passive as Chick–fil–A managers and The Danny certainly wouldn’t give them a free sandwich much less a place to pitch the teepee.

The protests inexplicably moved to away games where the crushing level of indifference was almost as bad as the hostility in DC. What protesters needed was a judge or unelected bureaucrat they could persuade to force Snyder to change the name.

That’s where the teleworking fools at the US Patent & Trademark Office came in handy. Normally the left avoids any contact with capitalism for fear of contamination, but in this instance if USTPO revoked the “Redskins” trademark it would deal a real blow to Snyder’s pocketbook. No trademark means no license fees for use of the name.

The board decided “Redskins” was offensive to a nebulous, but reportedly large number of Indians. Therefore, the name violated the Lanham Act that bans epithets from trademark protection. That decision was the only time the “movement” had a chance of gaining approval from a large portion of the Washington fan base if only by accident.

Trademark removal was good for fans, since knockoff ‘Skins wear would be both legal and much cheaper than Danny–approved items.

In response, Snyder stood firm, went on a tour of Indian Country and appealed the decision.

One of the complaints against the Annenberg poll was respondents weren’t asked if they were on tribal rolls. It also only asked one question regarding the name (a good indicator of the issue’s importance), instead of bombarding interviewees with repeated questions on the topic that serve by weight of numbers to increase the issue’s significance for polling purposes.

To rectify that oversight and reap the benefits of 12 years of negative Redskins publicity the Washington Post commissioned a new poll. This time the Post only interviewed people who identified as Indians, which means Sen. Elizabeth “Fauxcahontas” Warren would qualify.

The result just about buried the hatchet for the war party. The Post reports, “Nine in 10 Native Americans say they are not offended by the Washington Redskins name.” And surprisingly, “An even higher number — 8 in 10 — said they would not be offended if a non-native called them that name.”

“That name” is a nice touch and shows the Post is planning to stay on the warpath even if the braves aren’t. The rest of the chiefs–without–Indians bring to mind Churchill’s definition of a fanatic, “one who can’t change his mind and won’t change the subject.”

Susan Harjo, lead plaintiff in the USTPO case told the Post, ““I just reject the results.” While representatives of the Oneida Nation and National Congress of American Indians said the poll was “encouraging.” Specifically: “Native Americans are resilient and have not allowed the NFL’s decades-long denigration of us to define our own self- image.”

That’s a truly breathtaking level of PR spin and I predict a great future for all three with the Trump campaign.

Meanwhile Dan Snyder, of all people, serves as an example to the rest of a cowardly corporate America. Companies, teams and institutions don’t have to be at the mercy of self–appointed moral scolds.

Support Conservative Daily News with a small donation via Paypal or credit card that will go towards supporting the news and commentary you've come to appreciate.
Tags
Dan Snyder Politics racism The Washington Redskins