It has always been with a sense of awe that I regard those who have either voluntarily or involuntarily, assumed the role of guardians of life and liberty, by taking an oath to preserve and defend the Constitution against enemies, foreign and domestic. 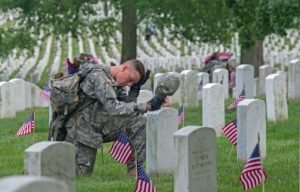 We owe our security, safety, and freedoms to our military men and women who don the uniform of our various military branches, who may enlist for different reasons, yet are willing to make the ultimate sacrifice. They know all too well that they can, and most likely will, be called upon to place their lives in harm’s way for our sake, and untold millions around the world.

I vividly recall visiting Arlington National Cemetery as a teenager. Even at that age I was moved to tears to observe the seemingly numberless, perfectly aligned crosses marking the final resting places of those who have fallen in defense of liberty. The experience was made even more poignant by observing the solemnity of an internment ceremony of yet another of America’s young sons, buried in the soil that he gave his life to defend. 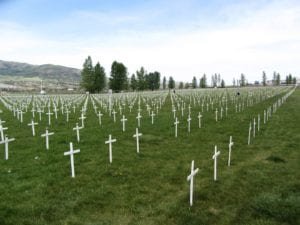 Those same emotions have cascaded over me as I have visited the Field of Heroes in Pocatello, Idaho, honoring those who served in Afghanistan and Iraq, and witnessed the traveling Wall recognizing the fallen from the Vietnam War. The sense of loss, coupled with profound gratitude for their sacrifices in our behalf is truly ineffable.

Over the years, with the added perspicacity afforded by historical context, and the increased sensitivity to sacrifice that comes with age, my sense of gratitude has only deepened. Especially in an era when there is no compulsory military service, why would young men and women full of hope and promise for the future be willing to sacrifice their future, for ours? What possibly could motivate them to secure our future, our lives, and our freedom by placing theirs in jeopardy?

Various reasons are given for joining the military, but after reading, hearing, and watching testimonials of countless brave young men and women who joined our armed forces ranks after 9/11/01, I’m convinced the majority do it at least in part, out of a sense of protection for the nation they love and their families for whom they’re willing to give all. They do it out of loyalty to the principles of life, liberty, and the pursuit of happiness, which made America unique among all nations. They do it out of a sense of gratitude, that because they have been given much by being born in relative freedom in these United States, that they too must give. 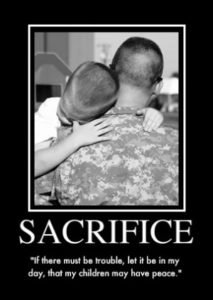 Sacrifices are not made solely by those who serve, but by their families as well. Our soldiers’ service is made nobler and more sacred, by the sacrifices made by their families. They sacrifice time with their husband, father, wife, mother, daughter or son, as they accept orders to be separated from loved ones for extended periods of time and often thousands of miles apart. They forgo familial security and many of the temporal comforts enjoyed by most citizens. They relinquish control of their lives, placing their very souls in the hands of those of authority to command them into bellicose and violent milieus.

War and military conflict have political components that inexplicably preclude unanimity of support from we citizens who are being protected, and whose rights are being secured. Regardless of the politics, or how we may feel about specific conflicts or even war in general, none of that should obviate our intense gratitude and respect for these guardians of freedom.

Indeed, the most primary enumerated function of our federal government is defense of the realm, which is fulfilled by our armed forces. Over the past several years they have been called upon to do more, yet with less and less funding and resources. Having social engineering and political correctness policies foisted upon them only further hampers their ability to fulfill their mission. The Army troop count is down to pre-WWII levels, and the Air Force is now raiding air museums for parts to keep our air defenses viable. Readiness is further impeded by the lack of funding for range and weapons training, because of the transportation, fuel, and ammunition costs. As my Army son says, “You cannot defang and declaw your best fighting dog and then throw it in the ring expecting him to win.” 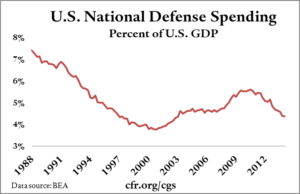 Meanwhile morale is at a new low. According to the Military Times, the percentage of armed forces personnel satisfied with their pay and benefits has been cut in half in just 5 years, from 87% in 2009, to just 44% in 2014. While part of the precipitous decline in morale may be largely attributable to the numerous problems with the Veteran’s Administration, much also has to do with the reneging of GI Bill benefits, and reducing garrison benefits such as the Commissary and affordable grocery products for families. All of this is further exacerbated by a 15% approval rating of the current Commander In Chief by the military. It’s hard to perform your job optimally when you have no confidence in your leader.

All of these trends must be reversed, which can only be done by national leaders who respect and fund the military commensurate with their mission and their sacrifices. The current rate of readiness deterioration places our nation, and the world, at risk. To any who claim to be Americans, such a diminished capacity is alarming and threatens our liberty and freedoms. All this should be a wakeup call as we celebrate the lives and sacrifices of those who serve, and have served. 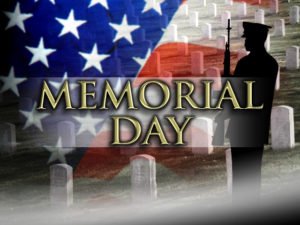 The significance and emotions associated with Memorial Day should be pervasive, and not limited to a single day each year. Jesus said, “Greater love hath no man than he who would lay down his life for his friends,” and this is what our soldiers are willing to do for us. May we individually and collectively, more fully acknowledge our gratitude, our respect, and our dependency on those who take upon themselves the guardianship of the republic. And may we commit likewise to preserve, protect, defend, and perpetuate those liberties they fought for, not just on Memorial Day, but every day.

Support Conservative Daily News with a small donation via Paypal or credit card that will go towards supporting the news and commentary you've come to appreciate.
Tags
Memorial Day patriotism The U.S. Military