Donald Trump has upended presidential campaign conventional wisdom yet again. It was traditional for candidates in former years to wait until after inauguration to break campaign promises. Trump doesn’t even wait until he’s the nominee. 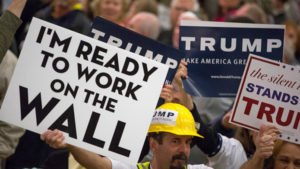 Before last week’s startling announcement two of Trump’s biggest applause lines were “I’m self–funding my campaign” and “go ahead and kick that demonstrator’s a**.”

Going into as much detail as he ever goes into, Trump would explain, “By self-funding my campaign, I am not controlled by my donors, special interests or lobbyists. I am only working for the people of the U.S.!”

And the people — at least those who made it inside the venue and spoke English — loved it! He’s not PC and he’s building the wall! Trump is his own man. He can’t be bought or bribed.

Trump’s independence gave him credibility. Juan Bush bragging about his fund–raising total may have impressed professional politicians, but it told average Americans that he was more promiscuous than the rest of the field.

When people are tired of bought–and–paid for politicians, proclaiming yourself the biggest sellout of all is hardly a vote getter.

Money is the mother’s milk of politics and the man who brings his own cow is his own man.

As long as Trump could get by on the cheap, much like the interior decoration in his casinos, self–funding was okay. He limited his spending to a mere $40 million during the primary because the news media, his private superPAC, helped him dominate primary coverage.

Michael Bloomberg — another rich guy, but lacking a personality — had to spend more of his fortune to become mayor of New York than Trump did to win the GOP presidential nomination in a nationwide campaign.

Now Trump has made what Deon Sanders used to call a business decision. He knows his media superPAC will be all Hillary all the time in the fall and it will take real money to replace that free coverage. He’s concluded it’s too expensive to be un–bought and anti–establishment in the general election. Now he’s listing himself on Craigslist under the headline: Anti–Establishment Insurgent for Rent.

This is extraordinary. Trump’s absorbing the Republican National Committee’s fundraising apparatus and soliciting big–money donations repudiates half of his most effective message to voters. Trump’s explanation when asked about the about–face was he could sell a building and finance his campaign, but why bother?

After all, self–funding was only a promise to the people who choose Trump to be their nominee. It’s not like he signed a contract. If Trump is questioned regarding this slap–in–the–face to Main Street American’s who sent money, attended rallies and voted for him, no doubt his answer will be a variation on “Who are you going to believe? Me or your lying ears?”

Even MSNBC, hardly a fan of Trump or the GOP, thinks this turnabout is a huge mistake: “Trump is taking one of the best arguments in support of his candidacy and throwing it out the window…Trump has argued, ad nauseam, that campaign contributions have a corrupting effect on public officials. Politicians can be bought, the argument goes, and Trump knows because he’s done the buying.”

And now it appears Trump is at least for rent.

There are two ways to look at Trump’s decision. One, he’s not as rich as he claims — possibly explaining why Trump won’t release tax returns either — and he doesn’t have the money to run a general election campaign. Or two, he believes his own hype. Trump thinks he can do or say almost anything and his base will still support him.

Trump’s pump–priming made his candidacy possible. Can you picture him raising a dime from the usual suspects in May of 2015? By self–financing he turned lemons into lemonade and began a movement. Now he’s tinkling in the lemonade.

The truth is Trump — the man who listens to the Americans the elites ignore — is just as ready to tune them out as Democrats and Establishment Republicans when he finds it convenient. You might say during the primary Trump self–funded and during the general election he self–destructed.

Support Conservative Daily News with a small donation via Paypal or credit card that will go towards supporting the news and commentary you've come to appreciate.
Tags
campaign finance Politics