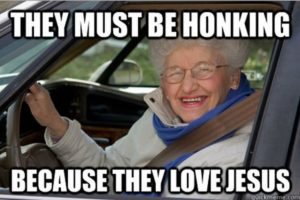 Normally cost is the last consideration when an unelected bureaucracy is in pursuit of “safety.” No price is too high, particularly if business or conservatives are footing the bill. Even if only one child, polar bear or glacier is saved by the expenditure, it’s a small price to pay.

The only exceptions to this rule appear to be abortion mills and driver education.

In the former saving the child is hardly a priority and the toleration of a few fly–by–night operators is a small price to pay for “reproductive choice,” even if the “choice” may occasionally prove fatal for both parties. While for most families driver education simply represents a government–approved opportunity to get junior out of the house, with any actual education being a bonus.

That’s why the Washington DC Department of Motor Vehicles’ decision to require all future driver’s license applicants to “complete a private driver education course” came as an unpleasant surprise to Councilwoman Mary Cheh.

Cheh is one of those leftist busybodies that should never be allowed to wield any power not connected to a three–prong plug. If the story in the Washington Post said the DMV was limiting the educational requirement — that can cost almost $1,000 — to commercial operators or Trump supporters there would’ve been no repercussions.

Cheh is, after all, the councilwoman who spearheaded the requirement that every cab company in the District to paint their vehicles in an identical color scheme, approved by Ms. Cheh — an unnecessary expenditure that ran hundreds of dollars per vehicle. Cost is no object even for esthetic goals if Cheh approves.

Certainly safety is a frequent justification when the left wants to spend our money. Still, since this is DC, you can almost be certain that someone in DMV management has a relative that just opened a driving school and said school has just coincidentally received the DMV’s seal of approval for its rigorous motoring instruction.

But that’s not what bothered Ms. Cheh.

Evidently she was concerned because the impervious DMV bureaucracy acted without consulting her and consequently she missed an opportunity for media attention. She’s making up for that by holding hearings in the near future.

DC is a sanctuary city for illegal aliens. Complete lack of citizenship papers is no problemo, so why are the same politicians and bureaucrats so uptight about operating a car? If the illegal’s mere presence in the District is proof enough for the likes of Cheh that the individual belongs, why shouldn’t the act of sitting behind the wheel of an automobile be proof the individual has a right to be there, too?

These days it’s not possession, but presence that’s nine tenths of immigration law.

Frankly I’m glad Cheh manned (is that insulting for a feminist politician?) the barricades this time, because the design of the DC driver “education” was so poorly thought out, it guaranteed failure.

The program consists of 30 hours in the classroom and 8 hours of behind–the–wheel practice, presumably with an instructor. That’s exactly backwards. My research tells me there are zero instances of people sitting in a classroom being killed in an auto crash, but there are thousands happening on the street.

The ratio should instead be 8 hours in the classroom and 30 on the road. There the instructor could introduce the fledgling driver to the mystery of the turn signal and explain how it’s not just for turning, but comes in handy for lane changes, too!

Then there’s the speed limit. The number on the sign is the theoretical maximum and not an average. Zooming up to 80 in the far left lane and then dropping back to 50 mph while you take a call doesn’t give you an average speed of 65, it just makes you an inattentive fool alternating between tailgating and constipating the traffic flow.

And that’s only two of the many suggestions I have for the curriculum. Maybe if she reads this, Councilmember Cheh will invite me to the hearing.

Support Conservative Daily News with a small donation via Paypal or credit card that will go towards supporting the news and commentary you've come to appreciate.
Tags
Mary Cheh Washington D.C.