The $20 bill is indeed getting a facelift, as is the $10 and soon the $5 bill. Now, the penny may see it’s biggest change in history – elimination.

Why would the U.S. get rid of the penny?

Treasury Secretary Jack Lew has announced that Harriet Tubman would replace Andrew Jackson on the $20 bill, that Andrew Jackson would remain on the $10 bill but a woman would join him somehow and that changes were coming to the $5. If those changes weren’t enough in a single presidential administration – apparently it’s time to  again consider killing Lincoln.

Treasury Secretary Jacob Lew originally planned to put Susan B. Anthony on the front of the $10 bill and suspend production of the penny in a revamp of the nation’s money, according to a memo he sent to President Barack Obama last year.

It looks like Susan won’t be taking over the $10, but might show up elsewhere on the ten, but Lew’s memo does point out a glaring reason to do away with the U.S. one cent piece – it costs more to make than it’s worth. 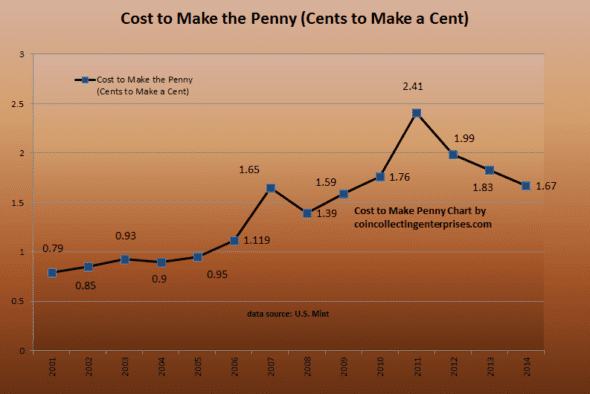 This isn’t a new argument, but it is the first time the treasury has pushed for the penny’s demise. In decades past, the U.S. Mint has been the defender of the penny. So why the change of heart? The it’s all about the money…

The U.S. Mint is supposed to generate revenue to offset its expenses in minting U.S. coins. The penny production cost heavily outweighs the income of minting and selling the penny. Inflation and commodity price increases clearly are making producing the penny unsustainable.

If you think it is only the penny that is a problem for the mint, think again. Copper isn’t the only metal to see inflationary trends as industrial uses increase.

Besides the cost, the Lincoln penny just isn’t convenient or necessary. The penny’s only purposes are to fill pockets and jars, get dropped on the ground and be used in clever quips, but that’s just my 2 cents worth.

In fact, due to this near-uselessness, pennies fall out-of-circulation faster than any other denomination – almost after the first use. This increases their cost as they must be replaced by more pennies just as soon as they are released into the wild.

The problem with this basic argument is that the nickel would also have to be axed to save the treasury any money. If pennies are killed off, more nickels would have to be produced which are also under-water in value. The only positive is that nickels don’t seem to disappear into the bottoms of change jars nearly as fast.

What happens if the U.S. drops the penny?

Buried in the annals of history is the death of the half-penny. Minted from 1792 until it’s demise in 1857, the half-penny disappeared without a collapse of society and had the buying power of today’s dime.

Rounding – lots and lots of rounding.

If taxes and fees were of no consequence, rounding wouldn’t be an issue for those preferring to pay without plastic. Taxes/regulatory fees are often percentages which means that simply asking merchants to price things in $.05 increments will not eliminate final amounts from ending up in-between the nickel.

In the above example, a credit card or check for $4.08 would be required to tender the transaction. But if you pay with a $5 bill, you’re only going to get $0.90 back – $.02 just vanished into thin air. The law of averages would presume that rounding would also create balancing actions when amounts come up on the high side of a nickel.

When will the U.S. retire the penny?

That much is unknown, but it was heavily expected to have happened .. last year. With all of the changes to U.S. currency coming in 2016, an announcement on the second killing of Lincoln is expected shortly.

Support Conservative Daily News with a small donation via Paypal or credit card that will go towards supporting the news and commentary you've come to appreciate.
Tags
$20 bill Abraham Lincoln