This could be the first year in a long time that a major political party convention actually serves the function of producing a nominee, rather than simply being a coronation of a nominee. For many who are emotionally invested in a certain outcome from the conventions this year, the angst and outright anger is nearly palpable. But it’s unwarranted, as borne out by history, and an understanding of the function of conventions. 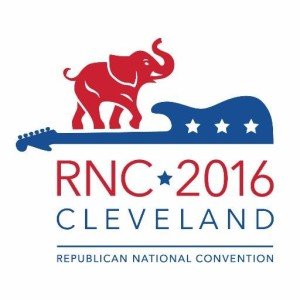 The Republican Party has also reformed its nomination process over the years, yet has left most of the delegate selection process in the power of the state party organizations. Each state has rules for selection of their delegates, and their voting obligations, that may be different from even their neighbor states.

For example, Republicans have never adopted proportionality as a universal rule, which has left some with “winner take all” delegate assignation while others have been allocated on a percentage basis. They have intentionally left many of the delegate rules in control at the state level, rather than imposing a top-down system. 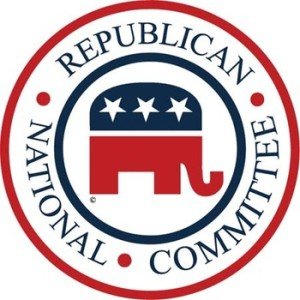 The RNC is going to great lengths to make the process as transparent and open as possible for the convention scheduled for July 18–21 in Cleveland. They’ve even created a new website where rules, facts, and details can be perused at conventionfacts.gop.

With a contested convention, the eventual nominee is unknown beforehand, since no candidate has garnered the requisite number of delegates to secure the nomination. Under the rules established by the party, since it is their convention and the respective candidates have at least ostensibly pledged allegiance to the party since they’re running under the party’s banner, several rounds of voting may occur before a nominee is selected by a majority vote. A plurality will not suffice. Most state rules only obligate delegates to vote according to the primary results of their respective states for the first ballot. After that, most can vote according to their conscience. 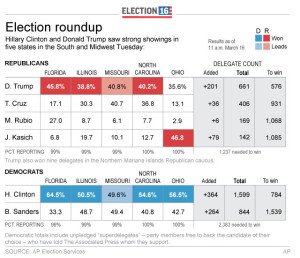 As of this week, Donald Trump has 736 delegates of the 1,237 needed to secure the nomination on the first ballot at the convention. The number of delegates awarded to non-Trump candidates, including those who have “suspended” their campaigns (meaning they’re no longer seeking the nomination with an active campaign, yet have debts they still need to liquidate) is 834 delegates. That’s 98 delegates more than Trump has at this point. And there are still 902 delegates to be determined by the remaining primaries.

This week Donald Trump reportedly met with the Republican National Committee to consider a rule change that would assure him the nomination even if he doesn’t reach the necessary threshold to secure the nomination. This seems more than a bit ironic since he’s been alleging that the RNC would change their rules to prevent him from securing the nomination, but he has no compunction in requesting a rule change to assure his victory. Perhaps ironic is insufficient; duplicitous would be much more accurate.

While Trump supporters are vociferous in their assertion that Trump should be the nominee if he has the most delegates, if he fails to secure the required 1,237 delegates, they must acknowledge that those supporting candidates other than Trump actually have more. So technically, the majority belongs with the non-Trump delegates, and a second or third ballot at the convention will likely determine the nominee. If he fails to secure the required number of votes, he loses the nomination, fair and square.

Metaphorically, having the best record in the NFL does not make a team the world champion. They have to win the Super Bowl to earn that title. A team is not merely proclaimed “champion” due to their record. Yet that seems to be what Trump adherents are arguing. 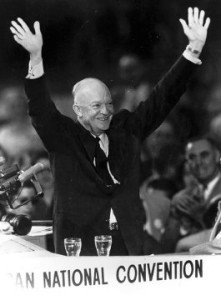 If, after losing a nominating vote on the floor of the convention, Trump opts to break his word and not support the nominee, he’s done nothing more than perhaps prove he is just a common politician after all, as his word means nothing. And if he pursues a third-party nomination, he simply proves he’s in it just for himself, and not for the nation, for he’d certainly hand the general election to either of the socialists running for the other party’s nomination.

For a little historical perspective, it would be good to know that Abraham Lincoln was the nominee who emerged from an open convention in 1860, on the third ballot. He was victorious even though he was not considered a contender heading into the convention.

Another contested GOP convention was in 1952 when retired general Dwight D. Eisenhower was in a close race with Senator Robert A. Taft, a respected party elder making his third try for the office once held by his father, William H. Taft. Eisenhower won on the first ballot after some delegates changed their vote to Ike.

In 1976 Ronald Reagan challenged incumbent president Gerald Ford. Neither had sufficient delegates to ensure the nomination, but the unpledged delegates to the convention pushed Ford over the nomination threshold on the first ballot. The same thing happened with Democrats in 1984, when the race between Walter Mondale and Gary Hart was decided on the first round of balloting after unpledged delegates opted for Mondale. 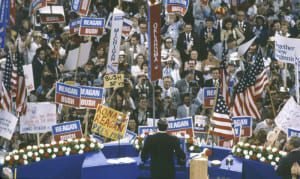 Of the total of 2,472 Republican delegates, 437 of them are unpledged delegates, and 168 of those are members of the Republican National Committee. Any combination of those could well be the deciding factor pushing Trump over the top, even in the first round if he fails to secure 1,237 before the convention. Or they could combine with the non-Trump votes to the nomination of someone else.

Despite cries of inequity and manipulation, the GOP has rules established, and will follow those rules in the selection of their nominee. While many Trump supporters maintain it’s them, not the party per se that should be selecting the nominee, it is, after all, the “Republican Party.” The Party chooses the nominee, not just a plurality of boisterous adherents.