The biggest casualties of the current election cycle are not the fifteen candidates who have dropped out. The biggest casualties are civility and reason. The dearth of civility displayed by the candidates toward the others has been abysmal, and is exceeded only by that displayed by their faithful adherents to one another. In such a toxic environment, reason seems incapable of rising above the fray.

On national TV shows we see bitter, acerbic attacks leveled at those of opposing positions. We hear debates degenerate into little more than name-calling sessions. And on political blogs and in social media, demeaning, disrespectful, and downright rude discourse is the norm. Often the most disgusting are the euphemistic references to human anatomical parts in such a way as to belittle those who would attempt to communicate an opposing perspective, all the while thinking they’re so clever and cute for having done so.

There can be several reasons for this type of behavior. Perhaps their own acumen is insufficient to facilitate rational discussion, like those who can’t express themselves without being vulgar or profane. Perhaps it’s a matter of ethnocentrism that dictates their perspective, and any other is simply inconceivable.

Some may be just so brainwashed they can’t conceive of any perspective or data that may even in the slightest manner conflict with their worldview. Such are not dissimilar to children who will cover their ears so they don’t hear anything they don’t want to. If they can’t hear it, it must not exist, and it certainly can’t be true.

Or perhaps they’re just too immature to converse in a civil, yet intellectually engaged fashion. They possess just enough knowledge to make them dangerous, but wo to the man or woman who attempts to inform them a little more! Mental prepubescence for these folks proscribe a rational examination of the facts.

There is an unwarranted arrogance in some extreme political ideologies that often disallows any meaningful dialogue. It’s like a religion to them; they’re right, they know they’re right, and everyone else is just wrong, regardless of reason, logic, or data. They may even claim a “spiritual confirmation” of their position. And if you think differently, it is beneath them to even engage in a courteous dialogue with someone of such heterodox opinion. Doing so would itself lend legitimacy to a countering view. 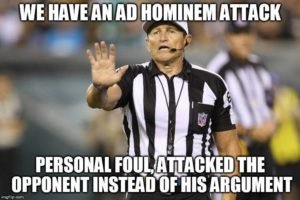 Some folks are just so convinced they’re right and don’t seem to care whether they are factual or not. Once their opinion is set, no data or logic will dissuade them. Their mind is a steel trap, locking in ignorance and bias and locking out rationality and objectivity. This type seems to double down on their incivility, asserting their opinion by engaging in such counter-productive tactics as name calling, ad hominem attacks, accusations, and casting aspersions.

There are a couple of rational responses to this caustic environment. We can choose not to participate, turn off the TV, change channels, walk away from confrontational egocentric and self-consumed people, and turn off the computer or change web sites to disengage ourselves from such undesirable and demeaning confrontations. The problem with this is the idiocy and inanity continue unabated.

For those of us who believe that an educated electorate and citizenry is far preferable to an uninformed, ignorant, or ill-informed one, retreat is unconscionable. We attempt to participate in the realm of public discourse and dialogue in a way to improve and elevate it.

One’s position can be much more persuasively presented without condescending, vindictive, and downright nasty language. A persuasive, well-conceived, well documented, and well-articulated argument, is far more persuasive than a specious meme or cute one-liner that inflames rather than informs. If we are seeking to be understood and to enlighten others, the intent should be to do so as rationally and cogently as possible.

With the exception of Donald Trump, I can think of no instance where political converts have been won through caustic, acrid, or demeaning speech or diatribes. He may accumulate followers that way, but his supporters win no arguments with that tactic. Apparently only the inane and uncivil can be persuaded by the inane and uncivil. From the general public, they earn consternation and isolation from those seeking meaningful engagement in the realm of ideas.

Perhaps an appeal to reason and civility places too much of a burden on humankind. The great philosopher Bertrand Russell once lamented, “It has been said that man is a rational animal. All my life I have been searching for evidence which could support this.” And if he were to witness the current political climate, he’d be no more optimistic. For too many who are engaged in the public political debate are clearly beyond the parameters of rational thought, civility, or decency.

We may never be able to change the inane and the rude. And if we seek merely to yell louder and more rudely than the next guy, we simply make ourselves more inconsequential in the political process since we provide more reasons for others to not agree with us than to agree.

We can all do more to contribute to the quality of the public debate. We can actually be civil, and respectful, even to those who may deserve little of either. We can choose to engage in the political process rationally and reasonably. Our republic must survive by a citizenry that is “enlisted by all their interests on the side of law and order, habituated to think for themselves and to follow their reason as their guide,” which is far preferable to a public comprised of “minds nourished in error and vitiated and debased… by ignorance, indigence and oppression,” as Thomas Jefferson declared. We can choose which we are.