There is no doubt that this country is under siege, I don’t mean by terrorists, although they are a great concern. I’m talking about the weapon that the Looney Left has come up with and make no mistake, if not confronted it will surely bring down America as we know it. It has been going on for years, but has exploded under king Obama and will only get worse if not confronted.

We’ve all heard the words, racist, homophobe, sexist, bigot; the Left throws them out whenever they are either,

Well let me say this, if they think that my beliefs and views make me a racist, sexist, homophobe, or bigot then I am a proud one, because those Looney Lefties have no clue what the meaning of those terms actually are.

As you can see the Left tries to make you feel guilty by calling you names if you don’t agree with them and by the most part it is working. People need to start standing up instead of hiding in the corner when one of these idiots calls you a name. America is sliding down the toilet, and to me it doesn’t seem like there will be a way back.

We now live in an America that is upside down, what was wrong is now right, what was right is now wrong. What was bad is now good and what was good is now bad. I read that during the Revolutionary War only 13% of the country fought for independence and they created the greatest country the world has seen. Why are we now letting the minority in this country destroy what our Founding Fathers created? By the way, if you admire our Founders you are a racist, according to the Left. The silent majority had better stand up and take the country back or else we are truly finished. Obama came into office and said he would transform our country, people thought he meant for the better, many people (like myself) knew what he truly meant. He came into office and proceeded to strip America of its greatness, the Shinning City on the hill that Reagan was so proud of, has now become a slum thanks to Obama.

When Benjamin Franklin helped finish our Constitution he was asked; ‘Well, Doctor what have we got, a republic or a monarchy?’ Franklin’s reply: ‘A republic, if you can keep it.’ Remember those words, “If you can keep it.” Don’t let the Left guilt us out of a country.

“What Kind Of A Society Are We Leaving Our Kids” Available here. 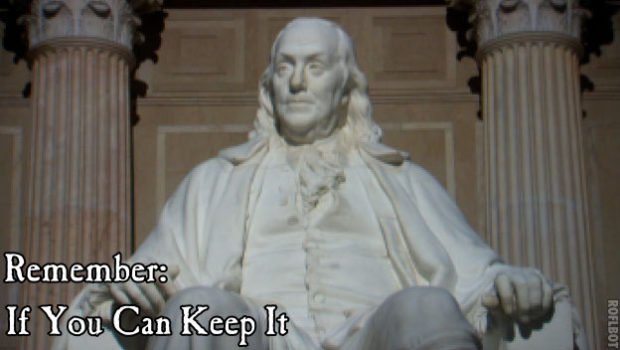