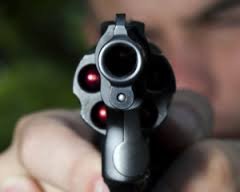 Bob is a truck driver from Iowa who has been driving for many years. He drives in lots of dangerous areas, so he’d like to carry a concealed handgun for self-protection. He’s got his permit, but his employer has told him that he is forbidden to carry it in his truck due to federal law.

One day he’s on the job when he parks late at night in an industrial park. He’s pulled up to the warehouse late at night where he is to make his delivery and he’s just waiting for the employees to come out and tell him they are ready to receive his shipment. In the mean time, he locks himself in his truck and tries to get some shuteye. He’s been on the road for a long time and feels like he needs a nap while he waits.

Later, he hears a tap on his door. Thinking it’s the ground crew come to tell him they are ready to unload, he opens the door. To his surprise, it is not the people he was expecting from the warehouse. It’s a thug with a gun demanding money.

Bob has a dilemma that plays itself out in different forms all the time for interstate truck drivers on the road. He’s got a tire thumper, a miniature baseball bat, under the seat, but against a drawn firearm, it’s useless for self-protection.

Bob keeps a fake wallet filled with a few dollars and cancelled credit cards for just such an occasion. He hands the wallet to the robber, who is satisfied and leaves. A colleague in another truck is not so lucky. Faced with same scenario, the other driver resists, and is shot in the head and killed. The memory of these events gives Bob nightmares as he grieves for a friend lost.

Scenarios like this one play out all over the country as interstate drivers struggle with the question of whether or not to go against their company policies and carry concealed in their trucks. Many companies re-enforce their anti-carry policies with the threat that truckers caught carrying would be subject to federal law. There’s just one problem. There is no federal law regarding the carry of a firearm in a commercial truck.

Wendy Parker is a writer for Overdrive Magazine, an industry magazine and website for professional truck drivers. She discusses this very issue in her article November 2012 article entitled “Navigating Gun Laws for Truckers”. You can read the whole article here.

Parker says, “The question of carrying a gun for protection is one that comes up often, and there’s a lot of murkiness and misinformation regarding actual laws for commercial drivers. First and foremost, start with your company’s policy. If your company doesn’t want you to carry a gun and you do, you could get into trouble and potentially lose your job. That’s common sense. For owner-operators, it’s up to you.

Parker quotes the NRA/IRA law which in essence says that truck drivers are not prohibited by law from carrying guns, unless they are convicted felons or some other legal reason prevents them from carrying.

Similarly, Parker says, the individual states determine their own carry conceal laws and it can be a legal minefield truckers to navigate and figure out what is legal where. A gun permit issued by one state, may not be good in another. An interstate trucker is left to figure that out on their own.

Gary Slider has a website that is kept up to date and has information regarding current handgun reciprocity laws. You can check it out at https://www.handgunlaw.us/. Slider is known to answer personal questions posed to him on this topic in email correspondence.

So if you are an owner operator, you can probably get away with carrying right? The problem is that many warehouses and companies where you may make deliveries may have rules against firearms. So if you are making a delivery, you are effectively left defenseless while you wait. Many of these companies are in states unfriendly to gun rights where carrying a weapon of any kind can lead to prosecution.

Things have gotten so out of hand that there has been a recommendation for a universal carry law for truckers, called Mike’s Law, named for truck driver Mike Boeglin who was murdered in his truck and his truck burned. This law would circumvent state laws for interstate truckers allowing them to carry concealed while they are working.

The problem here is, why should there be a need for a special permit for anyone? VIPs and politicians, actors and famous people, all have armed bodyguards. They don’t seem to have a problem in any state they visit. Why is it made so hard for legal gun owning citizens to protect themselves with their own firearms? The constitution provides for the right to carry in the Second Amendment. It’s literally written into the constitution from the founding. Laws preventing lawful carry are unconstitutional. Yet people are prosecuted all the time for having an otherwise legal firearm in an anti-gun state. In places like New York, New Jersey and California, you can be charged with a felony for carrying your firearm.

Federal law provides limited protection for travelers traveling through different states by plane, but even then lawful gun owners can run amok of local laws if they are caught in possession of their firearm in an airport. Jason Hanson writes about this scenario in his article for USA Carry entitled: Why People Get Arrested at Airports with Firearms. He gives some advice tips, which you can read here.

Hanson advises that if you are traveling, you are covered if you keep your gun in a locked case, separate from your ammo, and check the firearm in the belly of the plane. If you miss a connecting flight, you have the natural tendency to try to retrieve your firearm if you have to stay overnight. Don’t do that! The firearm is covered as long as it is in possession of the airport where you find yourself temporarily stranded. Once you retrieve your weapon however, you run amok of the law if you try to check it again when you get a new flight. People have been arrested and charged with felonies, their weapons confiscated for just that reason. I would recommend that if this happens to you, don’t get back on the plane. Buy a bus ticket or rent a car.

For decades the liberal left has been attempting to erode our Second Amendment rights. There has been some progress made in reinforcing those rights, but much still needs to be done. The left is constantly trying to force upon us even more restrictive gun laws, ending ultimately in confiscation. Ultimately if that happens, no one in this country, other than the rich politicians and public figures, will have the right to self-defense. If you can’t afford a bodyguard, you are out of luck.

For the traveler, tourist or truck driver, the problem remains. At the end of the day, I feel, citizens have to push for a national constitutional open or concealed carry law forever cementing your right to personal protection. Until that happens, people will continue to be vulnerable when they travel.

Support Conservative Daily News with a small donation via Paypal or credit card that will go towards supporting the news and commentary you've come to appreciate.
Tags
gun rights travelers truck drivers