Let me say I have never been a fan of Bruce The a-hole Springsteen, I could not even name one of his songs if you asked me to. But even if I were a fan, I would not be one any longer.

“To my mind, it’s an attempt by people who cannot stand the progress our country has made in recognizing the human rights of all of our citizens to overturn that progress,” Springsteen said in a statement.

Progress he says? This man is just as delusional as the white woman who says she is a black woman. Where have we come to in this country where truth takes a backseat to fantasy? You are born only one way and that’s what you remain until the day you die, no matter what you “Identify” yourself as.

“Taking all of this into account, I feel that this is a time for me and the band to show solidarity for those freedom fighters. As a result, and with deepest apologies to our dedicated fans in Greensboro, we have canceled our show scheduled for Sunday, April 10th,” Springsteen said. I’m assuming that he must have some kind of contract for that show. He is probably in breech of that contract; I hope a bunch of his fans get together and sue the pants off this clown.

This asshole forgets that freedom is a two way street, what about the freedom of that mother and 10 year old daughter using the bathroom, they don’t want to see some 40 year old pervert in there with them. When little girls and women start getting molested, is he going to speak out on their behalf, or is he just going to turn a blind eye like the rest of these loony Liberals will. I know, he probably thinks it will be worth it, as long as he gives those perverts their freedom.

Correct me if I am wrong, but didn’t he tour predominantly Muslim destinations in 2010, including Damascus, Doha, Dubai, and Beirut. I’m pretty sure those places don’t have transgender bathrooms either, as a matter of fact, I’m sure in some place they kill homosexuals. But he didn’t cancel those concerts.

I am willing to bet that Bruce never read the North Carolina Bill that he is so concerned about. If any man who claims to be a woman can use women’s bathrooms and locker rooms, then how do we keep the sexual predators out, do we put a guard in every public toilet?

I am afraid that Springsteen is just another brainless Liberal who has lost all common sense and doesn’t think about the big picture. I don’t know if he is married and has children; but if he does and he still thinks it’s OK for them to use the same toilet as a man in drag, then I think he is in need of a little mental adjustment himself. What the hell is he the Boss of anyway?

I’m gonna go put on some Frank Sinatra records; I’m pretty sure he was a man. 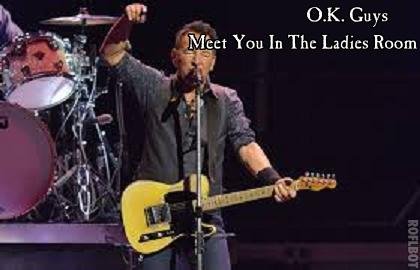