Recently I was talking with a few people and naturally the conversation turned to the election. I was asked who I was voting for; I said who ever the nominee is. After I got a strange look he said, even if it is Trump? I said yes. How can you vote for him, he is not a true Conservative. After I gave him a strange look back I said what the hell is a true Conservative anyway?

After he went through all the usual talking points, you know abortion, big government, government spending, illegal immigration, Obama-Care and so on, I started thinking, Trump seems to be on the same side he was on, so how could he say Trump was not a true Conservative. So I asked him.

His response was, he just recently changed his views. O.K. so what is the time frame one must hold these views before he is considered a true Conservative I asked, 2 years, 5 years 10 years. After all Trump supported McCain in 08 and Romney in 12 so I know he was at least a Republican. Yea, but he used to be a Democrat.

O.K. so was Ronald Reagan I said. Also I don’t understand your logic, so many Republicans/Conservatives always say how they don’t understand the thinking of these Liberals and how they need to come around to the Conservative way of thinking in order to turn this country around. Yet now when someone does that you complain they haven’t been a Conservative long enough, instead of saying, “great you have finally come to your senses” while welcoming him in.

After a few minutes he didn’t say much, but I added, Trump is bringing out more voters than anyone else, he is bringing out Independents, those so called Reagan Democrats, and many that haven’t voted in years. Yet we have those in the Republican Party who are pushing against him because he hasn’t been a Republican or Conservative long enough, some are even trying to start a third party, give me a break.

After all this I have come to the conclusion that like beauty, true Conservatism is in the eye of the beholder. So I will be voting for who ever the Republican nominee is and I hope everyone will be doing the same, if not we will wind up with Hillary and it will be your fault. 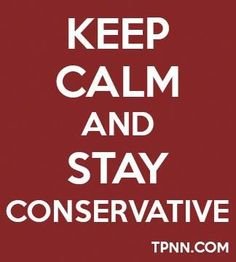