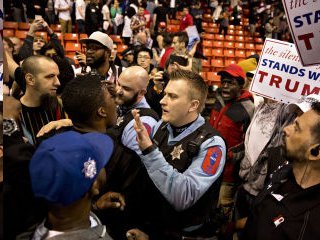 On Friday, a large and motley gaggle of MoveOn.org and Black Lives Matter activists — along with other left-wing agitators and actual left-wing terrorist Bill Ayers — took to the streets in Chicago to shut down a planned Donald Trump rally.

It seems, however, that according to reports on the ground, some of those protesters are now ready to attack and possibly rape female Trump supporters because of their race.

Rioters are now saying that groping female Trump supporters is OK, because – quote – “they are racist white bitches” .https://conservativefiringline.com/chicago-rioters-groping-female-trump-supporters-is-okay-they-are-racist-white-bches

These so called demonstrators are not demonstrators per se, but disrupters of an organized plan to take down Trump. Trump was right to call off the rally as he feared someone might get hurt and there was a good chance of that happening. In fact one young black Trump supporter was shot and killed. The demonstrators especially domestic terrorist  Bill Ayers said  they succeeded in shutting down a Trump rally. This is not freedom of speech, but very fascistic when you force someone else not to speak. The very people who cal Trump a fascist are the very thing themselves. +-+Daily+Newsletter+3142016&utm_term=BREAKING+Shots+Were+Fired+at+Trump+Rally+Look+Who+W

The people who oppose Trump say they don’t like his language and the things he says are racist and violent. Well the left has been doing just that for decades now. Let’s look at some of their recent rhetoric.

“Pigs in a blanket,  fry ‘em like bacon.” Black Lives Matter slogan against police at a BLM demonstration last year.

“What do we want? Dead cops. When do we want them? Now” Black Lives Matter demonstration in New York City  after Ferguson riots.

“They bring a knife, you bring a gun,”Barack Obama to fellow democrats about republicans before the 2008 democrat convention.

“We were building Pyramids before Donald Trump even knew what architecture was.”—Al Sharpton

“We ought to take Dick Cheney’s heart out and kick it around like football.”—MSNBC host Ed Schultz

“Then you have their plan which is for dirtier air and dirtier water and less people with health insurance.” Barack Obama on republicans in 2011.

And these leftists complain about Trump’s rhetoric?

BLM and Move On.org are the chief culprits in these demonstrations and are being funded by multi billionaire   George Soros who said his greatest time in life was when he supported the Nazis in Germany. And they have the unmitigated gall to call trump a Nazi? Look who’s backing them. Mr. Nazi  himself.

These radical leftists claim Trump’s a racist because of his statements about Mexicans being murderers, rapists and drug smugglers.  He said not all were rapists and criminals, just some and some are good people. Just look down at the border and you will find warehouses filled with intercepted drugs from over the border and that’s only the ones that were caught. Everyone knows about the drug cartels there. The man who shot and killed an innocent Kate Steinle was a Mexican who had been deported five times. Just last week another deported Mexican stabbed and killed five people here. There are many more such cases like  that  including rapes also. When you have millions of people coming across the border they are not all going to be innocent.  The United States can learn a lesson from Mexico’s border position with Nicaragua. You get caught sneaking into Mexico the first time you are deported .If you get caught a second time it’s five years in one of their hell hole prisons. Trump wants to deport these illegals and criminals and let the good ones  in who come here legally. What’s so racist about that? Eisenhower did it in the 50’s with his “Operation Wetback” and deported several thousand.

These leftists are mad at Trump for wanting to ban all Muslims. They make it sound like he meant it permanently. He said  ”Temporarily” until we can find out what’s  going on.” Jimmy Carter did it with the Iranians for four years with the Iranian hostage crisis. Trump has nothing against Muslims. In fact he has hired many and has many for close Muslim friends, but recent events warrant such an idea. After 9/11, we had  the Tennessee army recruiting center attack by a Muslim , the Ft. Hood rampage by Major Hassan that killed 14 soldiers and wounded others and more recently the San Bernadino attack by two Muslims who killed their fellow co-workers . That is why Trump wants a temporary halt on Muslims entering the country and for that they call him racist.

Hillary got into the fray calling Trump divisive. She’s in no position to talk. Her husband Bill, Obama and even her are great dividers as they pit men against women, blacks against whites, old against young, rich against poor.

Charles Krauthammer on O’Reilly’s show said Trump has to watch his rhetoric and that it’s O.K. for a businessman to talk like that, but if you are running for President you have to tone down the rhetoric or people will turn against you. He is right naturally and I have often said Trump has to watch his mouth, but I find it refreshing to have someone tell the truth for once and so bluntly instead of hiding behind a shield of P.C. words and flowery language.