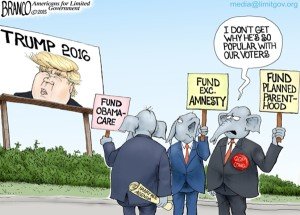 Two GOP insiders shared a presentation with the Washington Post that will likely guarantee that Donald Trump becomes the Republican nominee for president in 2016.

The slide show, shared with The Washington Post by two operatives advising one of a handful of anti-Trump super PACs, encapsulates the newly emboldened view of many GOP leaders and donors. They see a clearer path to stopping Trump following his two losses and two narrower-than-expected wins on Saturday.

The Republican establishment has no idea how to win an election and they’ve now proven it with .. a slide show.

The presentation is just the latest in a set of mis-steps.

First, the GOP has delivered on none of their campaign promises. The debt never goes down, spending never gets cut and Obamacare did not get repealed.

Second, pushing Rubio to go full-on 3rd-grader at and after the last debate destroyed any support he had and eliminated the possibility of him gaining any ground – anywhere. At what point does challenging Trump’s manhood or suggesting that he wet his pants make sense as a sound, adult and successful campaign maneuver?

The slide presentation is also illogical and will likely be proven wrong. It is centered on the idea that the GOP can manage the primary/caucus results to cause a contested/brokered convention.

the slow-bleed strategy is risky and hinges on Trump losing Florida, Illinois and Ohio on March 15; wins in all three would set him on track to amass the majority of delegates. Even as some party figures see glimmers of hope that Trump could be overtaken, others believe any stop-Trump efforts could prove futile.

Rubio nor Cruz have any chance at winning Florida if polls are correct. In Ohio, even democrats are defecting to vote for Donald. Illinois is looking increasingly Trump with every poll despite heavily-funded and hugely-organized efforts to dismantle his campaign. The chance that the GOP gets a brokered convention is next-to-none – especially after the Mitt and Rubio fiascos that were likely orchestrated by the same elitists that have failed to accomplish .. anything. Trump even looks good in New York and California.

Anyone remember the last time a Republican did well in California?

Trump is not a principled conservative nor much of a republican in traditional sense. He does not understand, nor care about, the impact the constitution has had in creating the America the world knows today. He won’t make great supreme court nominations, will likely turn free speech into something else and empower the justice department to go berzerk on the American people in the interest of security. But, he can beat Hillary and turn the House and Senate even more red – trade-offs. Trade-offs the GOP can’t fathom and won’t tolerate, but not because they are the protectors of the constitution or American liberty.

Even if the GOP manages to bring about a contested convention, Donald Trump will most-likely have the most delegates. The GOP would be forced to either allow him to take the nomination or orchestrate a subversive campaign to bring in another candidate of their choosing. By raising their middle-fingers to the American voters, the Republican establishment would be kissing the House, Senate and any future elections goodbye and Americans may be ready to yell “and don’t let the door hit you in the ass!”

The GOP establishment screwed Rubio into the ground with terrible advice, elevated Trump to anti-establishment hero status by pointing Mitt at him and made Cruz less of a story simply by ignoring him. Morons leading morons and the right-leaning seems to be done with them.

So the republican establishment’s big plan is to alienate a large population of republicans because that wins general elections .. or something.

The GOP’s chickens will come home to roost on and after March 15th when Florida, Ohio, North Carolina, Illinois, and Missouri vote, and it is likely that those chickens will poop all over them.

It is possible that Donald Trump doesn’t get all 1,237 delegates required to secure the nomination. In that case, a brokered/contested convention will be held.

If Trump gets the most delegates of all candidates and the republican elite decide to steal the election from the people and award , it will not go well for them:

If he gets there with not a majority but close to a majority of the [delegates] and doesn’t get the nomination, that’ll be very difficult. He could say, ‘I’m going to ask all of my folks to sit this one out to show them how big we are.’ Who knows?

Pooping is messy and messy is what we’re in for this election year.

Support Conservative Daily News with a small donation via Paypal or credit card that will go towards supporting the news and commentary you've come to appreciate.
Tags
2016 election 2016 Election News 2016 presidential candidates