Even the mention of political parties in general brings out the worst in some people, and the reaction only becomes more vociferous and “colorful” when specific parties are mentioned by name. As despised and maligned as the two major parties are, at any given time, it’s amazing they’re still around, even though they fill a crucial role in our American political system. But there has perhaps never been a presidential election in which party affiliation has meant less than in this one. 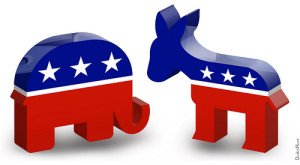 The founding fathers were adamantly opposed to the concept of political parties, or “factions,” as they often referred to them. The principles upon which our republic was established are fundamentally premised on the assumption that governance would be by rationality and collaboration amongst the citizenry and those in government, and our founders were convinced that a consensus for the greater good would always prevail.

The ink was hardly dry on the Constitution before factions, or parties, began to be formed. And perhaps most surprisingly, those most critical of parties were most instrumental in their formation. George Washington had said that party bickering “agitates the community with ill-founded jealousies and false alarms, kindles the animosity of one part against another.” And Thomas Jefferson claimed, “If I could not go to heaven but with a party, I would not go there at all.”

Washington’s policies, foreign and domestic, strengthened and expanded the power of the new federal government, spawning a faction of Federalists. A broad cross-section of the populace was opposed to this expansion of centralized power, and became known as the Democratic-Republicans, harboring the same loathing of centralized power that the Anti-Federalists did during the drafting of the Constitution. This anti-federalist sentiment led Jefferson to resign as Secretary of State to lead the opposition to the Federalist faction of Washington, John Adams, and Alexander Hamilton. This marked, in essence, the birth of America’s two-party political system. Like the Anti-Federalists of yesterday, today’s Republicans generally favor less government, less centralized control over the economy, less regulation and control over the private sector, less spending, and lower taxes. Also, like their 18th century predecessors, the current iteration of anti-federalists also are more literal and devout in enforcement of our Bill of Rights, and the credo trifecta of the Declaration of Independence, “life, liberty, and the pursuit of happiness.”

Even though such a general belief system runs deep in the GOP (Grand Old Party), there’s no litmus test for fealty to those principles in order to declare party affiliation. Nor is it requisite for those who run under the Republican banner. It’s simply a matter of self-identification, and anyone can claim at any time to be a member of either of the parties, or none of the parties. 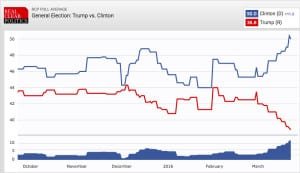 Perhaps even more disconcerting for Republicans, rather than broadening the GOP’s “big tent,” he’s narrowing it with his incendiary speech and antics. By so doing, he’s reshaping the perception of the party he claims to be a member of and wants to lead. And judging from current polls indicating Hillary Clinton would thoroughly trounce him in November by eleven points, his alienation of minority voters, certain religious voters, most voters with a sense of principle, many conservatives, and people with a sense of decency and propriety, his march to the nomination could easily be characterized as a GOP political suicide by amputation – one limb (or demographic) at a time.

No wonder “the establishment” Republicans, and life-long party members who have invested years, even lifetimes, to broaden electoral appeal while striving to stay true to party principles take exception to his redrawing the face of the party! He is not a Republican at heart, and in 2004 even said “I identify more as a Democrat.” He has given little over the years to the Party, and shares little ideological alignment with it, yet much like a 19th century “carpetbagger,” sweeps in and hijacks the political apparatus with which he shares little affinity, and takes over.

With no litmus test or oath of fealty to the GOP, or to the principles espoused by the party, it’s disturbing that one can simply assume the right to take over and reshape the face of an entire organization, simply on the strength of his populist lingo and propaganda. To many who have spent their lives attempting to favorably shape the public perception of their party, Trump’s hijacking is as distasteful as it would be if Rush Limbaugh were to do so to the Democrat Party.

Party representation has perhaps never, in recent political history, meant less substantively or ideologically, than it does this year. The surprising breadth of support for Trump is not based on principles and party ideology. It’s based on electorate anger, dissatisfaction with the system, and adulation of an anti-establishment persona. Because ideologically, Trump is a box of Cracker Jacks – we have no idea what kind of surprise comes inside!

Support Conservative Daily News with a small donation via Paypal or credit card that will go towards supporting the news and commentary you've come to appreciate.
Tags
Republican Party