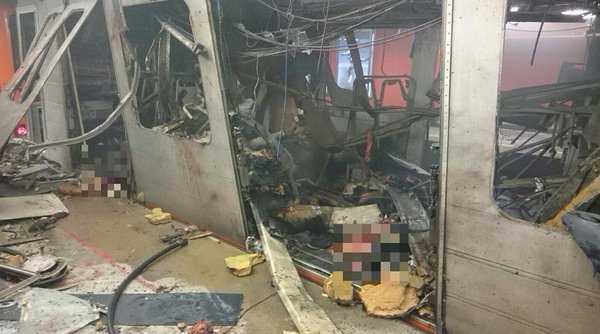 Once again ISIS – the JV Team as Obama calls them- struck killing 31 people and injuring scores of others. Thanks Obama!

Under this president we can’t even defeat a rag tag team such as ISIS. And where was our illustrious president when this happened? Why he was in Cuba making a speech when this happened. In the middle of the speech he was informed of the attack and instead of cancelling the speech and heading back to Washington to confer with his security council, he instead gives a 51 second comment and continues with his speech. After the speech he attended a baseball game with Raul Castro and even did the wave with him while people were dying and suffering in Brussels. GOPUSA – Obama does the wave as Brussels burns

Obama had the same reaction when James Foley was beheaded. He was out on the golf course when he heard of the beheading. He came off the course long enough to make a few minutes speech and then returned to the golf course. I guess we know where his allegiances lie.

These attacks and the attacks in France and any future attacks all have the backing of Obama’s new friends, Iran. Iran shouts “death to America” and burns our flags. Iran is the world’s leading supporter of terrorism and Obama signs a deal with them giving them 150 billion dollars and a clause in that agreement that says if Iran is attacked we have to back them. Again I guess we know where his allegiances lie.

Obama has been very lax in attacking ISIS. Iran backs Hamas and ISIS and they are Obama’s new friend. That’s why he hasn’t bombed their oil trucks saying the drivers are family men earning a living and you shouldn’t harm them. That’s why he has bombing raids on warehouses and other buildings at night when no one is in them. What a weak kneed traitorous skunk. His Muslim roots and upbringing also prevent him from defeating any Islamic enemy. Instead he offers words like “we must unite” and sends condolences to Brussels. His condolences as usual are a little bit late and are like closing the barn doors after the horses are in. He should have left Cuba when it happened. He vowed to help hunt down the terrorists behind the deadly attack in Belgium just like he said after the Charlie Hepto attacks in France and just like he said after the Paris attacks and so he is saying again after Brussles  and still they occur. “We can and will defeat those who threaten our safety and the security of the people all around the world.” he said on the last day of his trip in Cuba. I can’t help but think as the Bee Gees once sang, “It’s only words and words are all he has,” again.

In Isreal President Benjamin Netanyahu said, “The chain of attacks from Paris, to San Bernadino to Istanbul and the Ivory Coast and now Brussles and the daily attacks on Isreal is one continuous assault on all of us.”

Donald Trump has been proven right again about shutting down our borders before it’stoo late and to close up our borders until we can figure out what is going on.  He reiterated his temporary ban on new Muslims coming in here and all new immigrants should be fully documented.” Defense Secretary James Comey even said ISIS intends to infiltrate the refugee invasion now going on all over Europe and here. Thousands of Muslims are now coming in here as refugees and being dispersed all over  the country with no vetting going on. ISIS has stated they intend to have 10 simultaneous attacks in London in Sept. like the ones in Paris. Who will be next? It only took two to take out 14 in San Bernadino.

Belgian prosecutors said Wednesday that they discovered a suicide note on a laptop left in a garbage can that they believed to be written by one of the suspected Brussels bombers.

Belgian national Ibrahim el Bakraoui, a suspect in the bombings who died in Tuesday’s terror attacks, apparently wrote in French that he was in “a bad situation” and that if he did not act now he would end up in a prison cell.

The note may allude to the arrest of Saleh Abdeslam, a suspect in November’s Paris attacks who was found and detained in Brussels last week after four months of evading capture. Abdeslam is believed to have played a role in organizing and planning the Brussels attacks prior to his arrest, authorities have said.

Police say they found 15 kilos of explosives of the TATP type, 150 liters of acetone, detonators full of nails and screws, plastic bags, ventilators, and several other bomb-making materials during their raids on Tuesday.

Rudy Giuliani WENT OFF on weakling Barack Obama Tuesday after he went out to enjoy a baseball game with Marxist tyrant Raul Castro after the Brussels ISIS Bombings.

It’s outrageous that the President of the United States is not in the Situation Room right now planning on how to destroy ISIS… This was an attack on one of our allies. We belong to NATO. And an attack on a NATO ally, in case the president ever read the treaty, is an attack on the United States of America. He has an obligation to defend that country. It’s just like an attack on us. I don’t know if he’s ever read the treaty. The president’s knowledge of history is quite questionable. And, what’s he doing? He’s sitting with a dictator watching a baseball game while innocent people are being killed in a war!… So far his strategy hasn’t been working, right? …The man has no conception of the NATO Treaty and what it entails…

…Go tell those people who are dead in Brussels just how well Obama’s policies are working. Rudy Giuliani GOES OFF on Obama: He’s Sitting with a Dictator at Baseball Game