With the surprise passing of Supreme Court Justice Antonin Scalia last week, the nation lost one of the most ardent defenders of the Constitution and individual liberty in the history of the republic. Our liberties and citizens’ relationship to their government are more at risk now than perhaps at any other time. 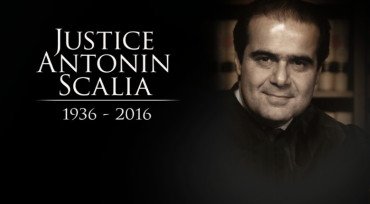 Immediately after the announcement that Scalia had died of heart-related issues, the distinguished jurist was regaled and demeaned by detractors who have taken umbrage at his judicial interpretations. One of the most despicable was from the Senior Style Editor for Cosmopolitan magazine, who proclaimed via tweet, “The devil is back in Hell! Yay!”

“I attack ideas. I don’t attack people. And some very good people have some very bad ideas. And if you can’t separate the two, you gotta get another day job,” the principled Scalia once said; something that many on the left clearly have no intellectual or moral grasp of.

And why was he so reviled? As former Attorney General Edwin Meese said, it was because “throughout his 30 years on the Supreme Court, Scalia championed the rule of law. He refused to permit his personal convictions to have any say in any rulings. Instead, he vehemently believed that his role was to apply the law, not to make it.”

As such, Scalia was perhaps most unique among our Supreme Court justices. As Senate Majority Leader Mitch McConnell said of him last week, “Today our country lost an unwavering champion of a timeless document that unites each of us as Americans. Justice Scalia’s fidelity to the Constitution was rivaled only by the love of his family. Through the sheer force of his intellect and his legendary wit, this giant of American jurisprudence almost singlehandedly revived an approach to constitutional interpretation that prioritized the text and original meaning of the Constitution.”

His most brilliant statements are found in the hundreds of opinions he wrote while on the bench. As a champion of liberty and the freedoms assured by the Constitution, he was an unrelenting defender of our bill of rights. As an example, in a 2013 case Scalia wrote the majority opinion that protected individual privacy, requiring authorities to procure a warrant to use a drug-sniffing dog outside a residence to determine if there are drugs on the inside.

He wrote, “But when it comes to the Fourth Amendment, the home is first among equals. At the Amendment’s ‘very core’ stands ‘the right of a man to retreat into his own home and there be free from unreasonable governmental intrusion. This right would be of little practical value if the State’s agents could stand in a home’s porch or side garden and trawl for evidence with impunity.” 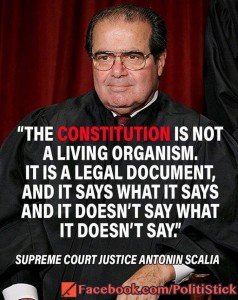 In the 2004 Rumsfeld v Hamdi case, the court sided with the Bush administration indefinitely detaining U.S. citizens without charges being filed during the war on terror. Scalia wrote the dissent, arguing, “Many think it not only inevitable but entirely proper that liberty give way to security in times of national crisis — that, at the extremes of military exigency, inter arma silent leges. Whatever the general merits of the view that war silences law or modulates its voice, that view has no place in the interpretation and application of a Constitution designed precisely to confront war and, in a manner that accords with democratic principles, to accommodate it.”

Justice Scalia once said, “As long as judges tinker with the Constitution to ‘do what the people want,’ instead of what the document actually commands, politicians who pick and confirm new federal judges will naturally want only those who agree with them politically.” This could not have been more evident than in one of the most consequential Supreme Court decisions of the 21st century. Scalia authored the dissent to Obergefell v. Hodges legalizing same-sex marriage. Not because of homophobia, as his detractors alleged, but because he objected to nine judges functioning as an oligarchy overriding the will of the people.

He wrote, “It is not of special importance to me what the law says about marriage. It is of overwhelming importance, however, who it is that rules me. Today’s decree says that my Ruler, and the Ruler of 320 million Americans coast-to-coast, is a majority of the nine lawyers on the Supreme Court. The opinion in these cases is the furthest extension in fact—and the furthest extension one can even imagine—of the Court’s claimed power to create ‘liberties’ that the Constitution and its Amendments neglect to mention. This practice of constitutional revision by an unelected committee of nine, always accompanied (as it is today) by extravagant praise of liberty, robs the People of the most important liberty they asserted in the Declaration of Independence and won in the Revolution of 1776: the freedom to govern themselves.”

The President is well within his constitutional requirements to put forth a replacement to Scalia on the court, and the Senate is well within its constitutional powers to not confirm a replacement in the final months of Obama’s administration. Quoting from the president himself, “Elections have consequences,” and the electoral process seated a confirming body that, by majority, would prefer a judge closer in interpretive disposition to Scalia than to Sotomayor or Kagan, Obama’s previous appointees. They can wait as long as they want, until they get a nominee that so comports, whether under this president or the next. Regardless, whoever is ultimately appointed will truly never replace the inimitable, irreplaceable Justice Antonin Scalia.

Support Conservative Daily News with a small donation via Paypal or credit card that will go towards supporting the news and commentary you've come to appreciate.
Tags
Antonin Scalia The Supreme Court of the United States